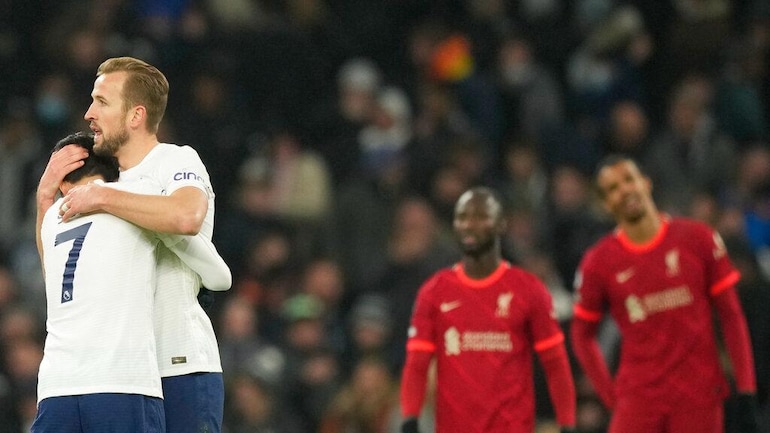 Kane put Tottenham ahead with a goal in the 13th minute. (AP photo)

Harry Kane ended their league scoring drought as Tottenham Hotspur held Liverpool to a thrilling 2-2 draw at home, while Chelsea’s title ambitions took another hit after their goalless draw at Wolverhampton Wanderers. A mistake by Liverpool keeper Alisson gave Tottenham’s Son Heung-min the equalization in the 74th minute that the hosts fully deserved, although the guests were upset about some controversial decisions.

Chelsea complain about playing with a coronavirus-free squad in the drawing to Wolverhampton. Stamford Bridge are thus six points behind leaders Manchester City, who are now three points behind second-placed Liverpool.

Chelsea were missing seven players with COVID-19 and Jorginho at Molineux was not put at risk after inconclusive test results.

Harry Kane ended his two-month league drought after 13 minutes to put Tottenham in front and Antonio Conte’s side should have been ahead before Diogo Jota equalized.

Andy Robertson put Liverpool ahead in the 69th minute as Liverpool looked to register their ninth consecutive win in all competitions. But Son bounced it to 2-2 and the visitors finished with 10 men after Robertson was soon red-carded for a wild tackle.

Both sides’ starting lineups were affected by COVID-19, with some regulars at Tottenham only fit for the bench, while Liverpool’s Thiago joined Virgil van Dijk, Fabinho and Curtis Jones on the absent list after being forced to split .

In an afternoon of several controversial decisions, Liverpool manager Jurgen Klopp was booked for protesting when Jota was pushed into the field in the first half, but was not fined.

Chelsea boss Thomas Tuchel, meanwhile, was criticizing the league for not postponing the trip to Wolverhampton, which ended 0-0 on a weekend when six out of 10 games were called off due to coronavirus cases. was given.

“We were put at a great risk to the health and safety of the players, not only because of COVID, but also physically,” Tuchel said. “I’m not sure I’ll catch COVID. Hopefully I don’t catch it.”

US puts 8,500 soldiers on high alert amid Russian tensions