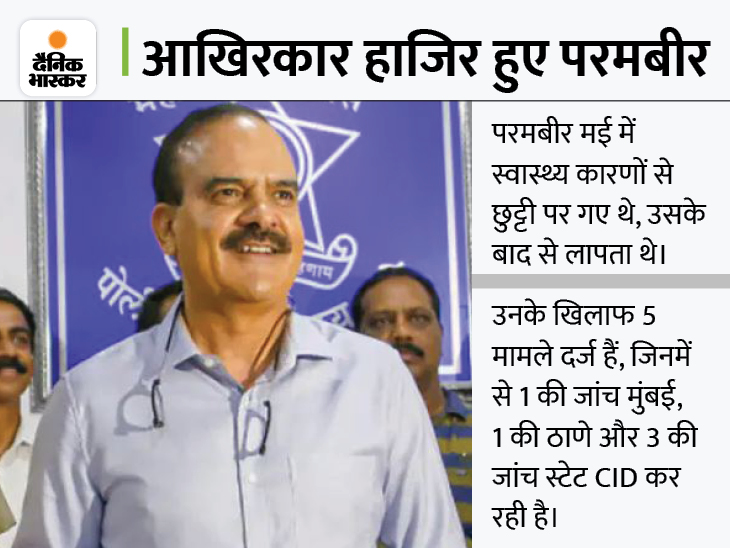 Former Mumbai Police Commissioner and current DG Home Guard Parambir Singh, who was missing for 232 days, suddenly appeared in Mumbai on Thursday. He first reached the crime branch office and got his statement recorded in front of DCP Nilotpal. Crime Branch team is probing a ransom case registered against Singh in Goregaon. A non-bailable warrant was issued against Singh in this case and he was also declared a fugitive a few days ago.

Phone turned on in Chandigarh on Wednesday
Earlier on Wednesday, suddenly his phone was switched on in Chandigarh. Since then it was being speculated that Parambir may soon appear before the Mumbai Police. Earlier, giving a big relief to Parambir Singh, the Supreme Court had stayed his arrest on the condition of cooperating in the investigation.

During that time, his lawyer had said in the court that Parambir Singh was being implicated in the whole case. The same officers whom he has punished for corrupt practices have been made complainants today. His lawyer in the court had also said that Parambir’s life is in danger in Mumbai, so he is out of the city. Till now 5 cases have been registered against him.

Also read- The biggest allegation ever on Parambir: Retired ACP Pathan said – Parambir hid the phone of Kasab, the culprit of Mumbai attack

Police team went to Chandigarh several times
Earlier, the Home Department had also informed the Intelligence Bureau about Parambir’s disappearance. Significantly, Parambir was missing since the month of May after going on leave due to health reasons. The Home Department sent several letters to Singh at his Chandigarh residence and inquiries were made about his whereabouts, but no response was received.

Last month, Home Minister Dilip Walse Patil had said that they were looking into the provisions of the All India Services (Conduct) Rules to take action against the IPS officer.

Thane Police had issued a lookout notice
Mumbai’s Thane police had issued a lookout notice against Parambir Singh in July. He has repeatedly failed to appear before the Chandiwal Commission set up by the state government to probe allegations of corruption by him against former Home Minister Anil Deshmukh. After which a fine of 5, then 25 and then 50 thousand was imposed against him first. Despite this, when Parambir did not appear, a bailable warrant was issued against him.

SIT is investigating against Parambir
The Home Department of the government had constituted a 7-member SIT team to probe the allegations of corruption against Parambir Singh. This team is headed by a DCP level officer. The SIT team will also investigate the case of MCOCA registered at Juhu police station against a businessman named Vimal Agarwal. MCOCA case was registered accusing Vimal Agarwal of having a relationship with Chhota Shakeel during Parambir’s tenure as commissioner.