While normalcy was returning to every sphere of showbiz after the second wave of the pandemic, the foundation of the theater circuit remained firm. The question of whether it could get back on its feet troubled many, including thespians who had been performing for decades.

Yet, through online plays, audiobook performances, and live reading sessions, the stage never really took off. In the midst of the uncertainty and panic that formed the initial cacophony predicting its demise, an adaptive audience opened up to experiments and calmed the atmosphere of panic. For Makrand Deshpande, his reading sessions at home inspired him to work on new scripts after the end of the first wave. “In the first lockdown, I felt the urge to read an autobiography written by Mahatma Gandhi: The Story of My Experiments with Truth, and this forced me to do a one-man show on Gandhi after the first lockdown opened. During the second lockdown, I felt the need to write about Krishna and I performed with sitar player Niladari Kumar as the second lockdown ended,” says the 55-year-old. 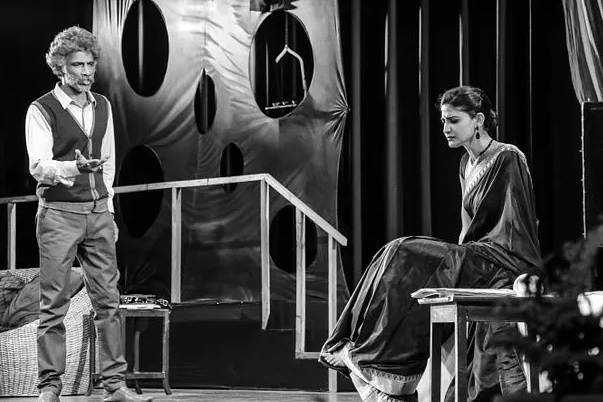 For actor Naseeruddin Shah, it was a unique moment in his long and illustrious career. “I’m not used to taking long breaks from shooting,” he says, “it was creatively satisfying that I was able to read a lot of things that were on my to-do list and that of my family and I did many performances online. Which I found very pleasant.”

Shah saw this period as an aspect of how unpredictable life can be. Even at the age of 71, he was being introduced to new experiences. “What I found challenging and instructive about performing online is that you can’t see or hear the audience. In any case, for me, even with live audiences, my joy in my work is not driven by their reactions,” he adds.

Actor Manav Kaul, 45, was perhaps the first witness to the outbreak of the pandemic when the start of his new play, Giving Up on Godot, was halted in its tracks. “The theater was really badly hit. Those who were doing theatre, went on to do other things. Now, bringing them back is a tough task,” he feels. Shah feels that what turned into a peculiar chapter in the history of theatre, it was because of its adaptive nature. “Mumbai has a long tradition of theater performances. Dramas in many languages ​​have flourished here for over a hundred years. Kolkata and Bangalore also have strong traditions of theatre. Overall, theater will survive as long as people feel the need to listen and talk to each other,” he predicts.

Kaul’s concern is for smaller towns as they may be the ones that will find it difficult to get back up. “When it comes to Mumbai, it is a very dependable city. Theater audiences are very loyal. Especially in times like these, people want to come back to art theater etc. But smaller cities will find it a bit difficult,” he says, hoping that 2022, will provide much-needed relief.

Sri Lanka vs Afghanistan 3rd ODI Live Streaming: When and Where to Watch Live Coverage on Live TV Online

Where is Jack Ma? Reports say Alibaba founder living in THIS country after crackdown by China