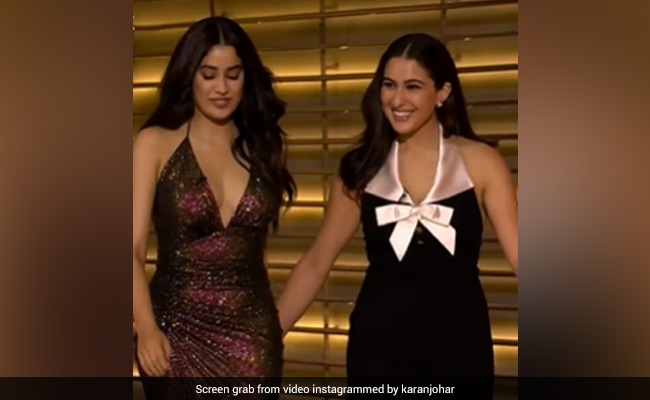 a new episode of Koffee With Karan 7 It is going to air on Thursday and before that Karan Johar has shared a new promo. This time Janhvi Kapoor and Sara Ali Khan will be seen in it. After an entertaining watch of Ranveer Singh and Alia Bhatt last week, the upcoming episodes promise to see Sara and Janhvi bring their “unfiltered best”. Karan Johar posted the promo video on social media and wrote, “Her unfiltered best of two of my favorite girls!” In the clip, Karan is asking Sara and Janhvi about their friendship. Jhanvi says, “So many people have told us that you all bring obscene side to each other.”

Karan asks Sara about the person she wants to date. “Sarah, give me the name of the guy you think you’d like to date today,” he asks. At first, Sara refused to reveal and then went hazy: “Vijay Deverakonda” (Telugu star, who was featured in Arjun Reddy and will star in the upcoming film Ligar). In the first KWK season, Janhvi Kapoor had confessed that she had a crush on Vijay Deverakonda. Knowing about the revelation, Sara asks Janhvi, “Do you like Vijay?”

Karan also asks Sara about her ex-boyfriend who is rumored to be Kartik Aaryan. “There’s a reason your ex is your ex,” he says. She replies, “Because he’s everyone’s ex.” Interestingly, last season coffee with karanSara admits to finding Kartik Aaryan “cute”. Soon after the episode, the two worked together in the film, Love Aaj Kali,

Take a look at the video below:

Jhanvi Kapoor is shooting for the film these days. Bawaal She will be seen in Europe alongside Varun Dhawan good luck jerry And Mr and Mrs Mahi Sara, on the other hand opposite Rajkummar Rao, will star in Laxman Utekar’s untitled film opposite Vicky Kaushal.

Iranian newspaper: Rushdie attack may be US plot to spread Islamophobia

India vs Zimbabwe: With KL Rahul Back as Opener, Shubman Gill Might Have to Come in at No. 3