Chetan Bhagat responded to the viral screenshots shared by Uorfi Javed which seemed to be of the writer’s alleged WhatsApp chat. Chetan took to Twitter to react to the screenshots but did not address them directly. He wrote, “Have never spoken to/chatted with/met/ known someone where it’s being spread that I have done so. It’s fake. a lie.also a Non issue.Haven’t criticised anyone.And I also think there’s nothing wrong in telling people to stop wasting time on Instagram and focus on fitness and career”

The chats first went viral during the #MeToo movement.

Have never spoken to/chatted with/met/ known someone where it’s being spread that I have done so. It’s fake. a lie.also a Non issue.Haven’t criticised anyone.And I also think there’s nothing wrong in telling people to stop wasting time on Instagram and focus on fitness and career— Chetan Bhagat (@chetan_bhagat) November 27, 2022

For the unversed, Chetan and Uorfi are making the headlines for the former’s comment on the latter.

During a recent event, Chetan Bhagat took a dig at Uorfi Javed and said, “Boys are liking photos of women, commenting on them. Urfi Javed’s pictures garner crores of likes. On one side, there is an Indian youth who is protecting our nation at Kargil and on another side, we have another youth who is seeing Urfi Javed’s photos hiding in their blankets,” as quoted by DNA.

Responding to this, Uorfi wrote on her Instagram stories, “Stop promoting rape culture you sickos out there. Blaming women’s clothes for the behaviour of men is so 80s Mr. @chetanbhagat. Who was distracting you when you messaged girls half of your age? Always blame the opposite gender, never accept your own shortcomings or faults. People like you are misguiding the youth, not me. Encouraging men to put the blame on the women or her clothing when are at fault.”

She also shared a screenshot of a news article that mentioned that Chetan Bhagat apologised after the screenshots of his alleged WhatsApp chat were leaked during the #MeToo movement. “Men like him will always blame the women than accepting their own shortcomings. Just because you’re a pervert doesn’t mean it’s the girl’s fault or what is she wearing. Unnecessarily dragging me in a conversation, commenting on how my clothes are distracting young boys is such as f***ed thing to say. You messaging girls isn’t a distraction for them? @chetanbhagat”, she added. 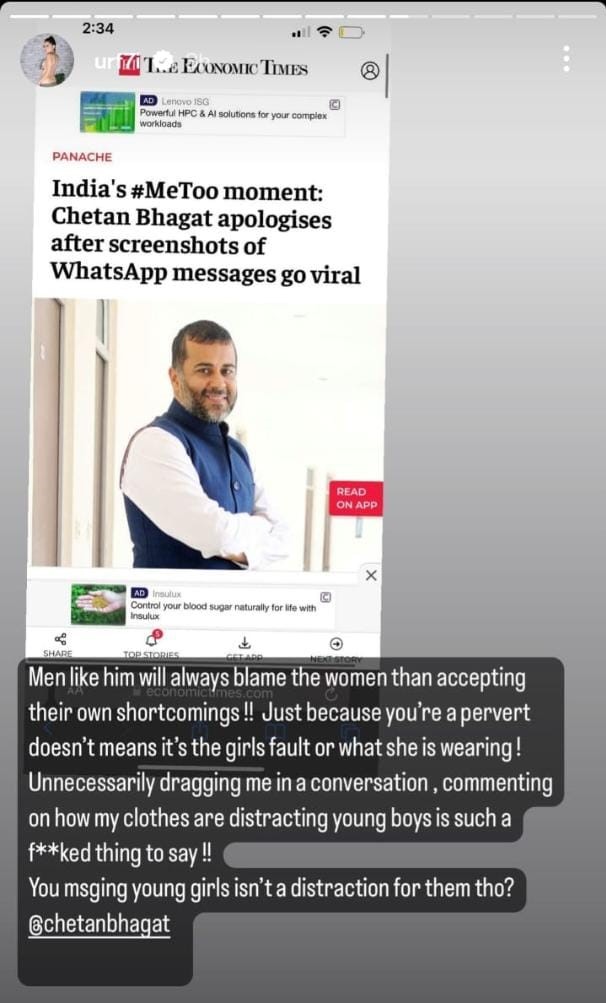