Days after the Punjab assembly passed a resolution reiterating the state’s claim on Chandigarh, legislators from Haryana convened a special session of their Vidhan Sabha on April 5 to stake a counter claim. The two northern states have a long-standing dispute over the ownership of their joint capital, along with residual issues from the 1966 Punjab Reorganization Act that carved out modern-day Punjab and Haryana. The latest round of hostilities was triggered after Union home minister Amit Shah, on a visit to Chandigarh on March 27, announced that Central Civil Services rules will apply on employees of the Union territory (UT), instead of Punjab Civil Services Rules, from April 1.

Days after the Punjab assembly passed a resolution reiterating the state’s claim on Chandigarh, legislators from Haryana convened a special session of their Vidhan Sabha on April 5 to stake a counter claim. The two northern states have a long-standing dispute over the ownership of their joint capital, along with residual issues from the 1966 Punjab Reorganization Act that carved out modern-day Punjab and Haryana. The latest round of hostilities was triggered after Union home minister Amit Shah, on a visit to Chandigarh on March 27, announced that Central Civil Services rules will apply on employees of the Union territory (UT), instead of Punjab Civil Services Rules, from April 1. 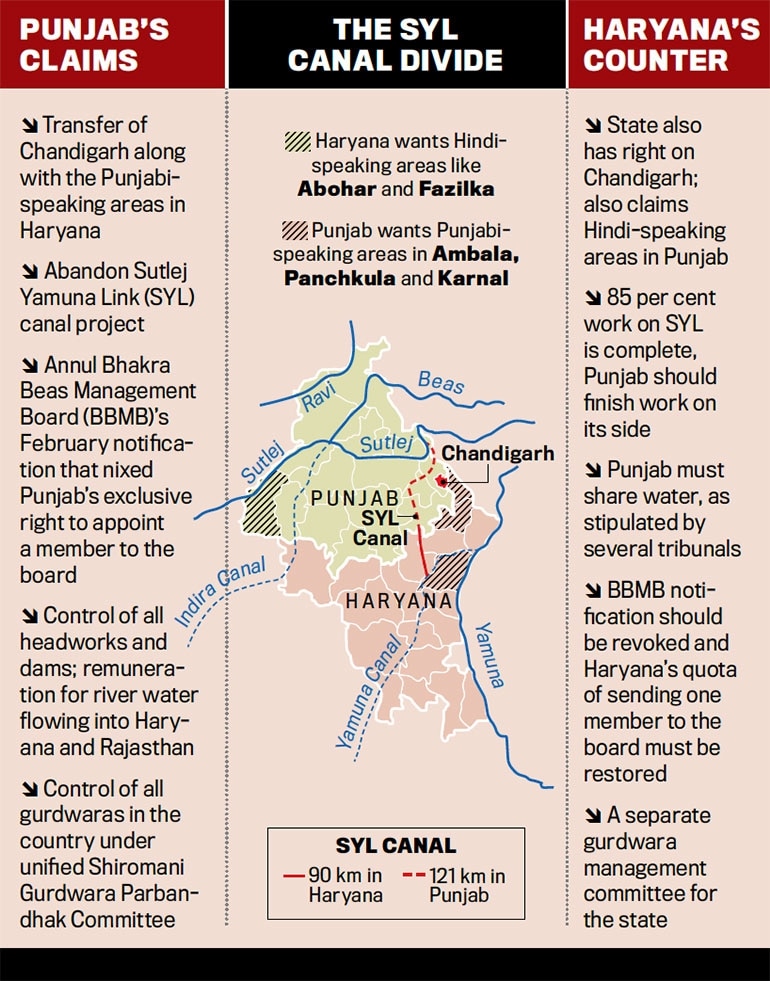 This has angered most political parties in Punjab who see it as “another big blow to the rights of Punjab”. The Sukhbir Badal-led Shiromani Akali Dal, looking to spring back into reckoning after the assembly poll route, was the first to react, pushing Chief Minister Bhagwant Mann to escalate the issue further and pass the resolution at a specially convened session. Mann also threatened protests from the “streets to Parliament” against the implementation of central civil services rules in Chandigarh.

Chandigarh is a sensitive issue for the Sikh-majority state, which lost its original capital, Lahore, during Partition and has not had a capital of its own since. Chandigarh, goes the overriding sentiment, was built to compensate for this loss.

The capital, though, is not the only sore point for Punjab. Besides making Chandigarh the provisional capital of both Punjab and Haryana for 10 years, many Punjabi-speaking areas too were awarded to Haryana, adding insult to injury as it were. Further, the Punjab Reorganization Act gave central agencies the control of irrigation water. In his speech in the assembly, Mann made a passionate appeal for the immediate transfer of Chandigarh to Punjab along with the Punjabi-speaking areas in Haryana, though he kept quiet on other contentious issues.

Back in January 1970, the Union government reportedly gave the nod to Chandigarh going to Punjab. Haryana was given five years to construct its own capital as well as a liberal Rs 10 crore grant for the purpose. This was linked to the transfer of Punjabi-speaking areas in Haryana to Punjab and the reciprocal transfer of Punjab’s Hindi-speaking and Hindu-dominated Abohar and Fazilka regions to Haryana. However, the provisions were unacceptable to both sides and the dispute festered. Chandigarh then was made the provisional joint capital of Punjab and Haryana under the same Punjab Reorganization Act, with the two states contributing government staff in a 60:40 ratio, respectively. But since the negotiations were not going anywhere, Chandigarh was accorded UT status in 1976.

Over the years, with the UT making its own recruitments, the number of Punjabi employees declined but the Punjab civil services rules continued to apply. While IPS and IAS officers held posts in a similar ratio from these cadre, the seniormost bureaucrats came from the AGMUT (Arunachal, Goa, Mizoram and UT) cadre.

In 1984, under the shadow of the Sikh insurgency, the Punjab governor was made administrator of Chandigarh. About a year later, the then prime minister Rajiv Gandhi negotiated a deal with HS Longowal, who was heading the Akali Dal. Less than a month after the July 1985 accord, Sikh militants opposed to it assassinated the Akali chief. Political parties in Haryana too were opposed to the accord as they blamed the then Congress state government for entering into a vague agreement, especially regarding the territories to be transferred to Haryana in lieu of Chandigarh.

Later, the Center formed commissions for the transfer of territories, including one under the then Supreme Court Justice ES Venkataramiah in 1986. Assigned to define Hindi- and Punjabi-speaking villages, the judge recommended exchange of some 70,000 acres of land. But neither Punjab nor Haryana agreed, and the transfers never took place.

The Justice JC Shah-led Punjab Boundary Commission as well as other reports also upheld Punjab’s right over Chandigarh, but the state’s politicians were not willing to relinquish claim over Hindi-speaking areas and give them to Haryana. Over the years, the issues of water-sharing vexed the situation even more. In July 1986, with the Khalistan insurgency set to condemn Punjab to two fallow decades, the Union government suspended the transfer of land indefinitely.

Cut to the present, and you find Haryana chief minister Manohar Lal Khattar too wading into troubled waters with his aggressive stand on the Sutlej Yamuna Link (SYL) canal construction and sharing of river water. While Haryana has completed its side of the work (85 per cent of the total) on the canal, Punjab has not moved an inch in the past so many years. It continues to be defiant, despite an arbitration mechanism being in place. The new Mann government has also shown no interest in the issue so far. Water has been a particularly fraught and emotive issue for Punjab (indeed more so during the two decades of the Khalistan insurgency). Despite directions from the Centre, sundry tribunals and even the Supreme Court, Punjab has refused to share water with Haryana.

Mann, who is just starting his term in office, has little leeway since emotions in the state are already running high. There is still residual anger against the farm laws, stoked further by the BJP-controlled Centre’s February 23 notification amending the Bhakra Beas Management Board (BBMB) Rules, 1974, and changing the criteria for the selection of full-time members. Board members can now be from across India, instead of just Punjab and Haryana. The BBMB was created as an autonomous board under the provisions of the Punjab Reorganization Act to regulate the supply of water and power to Punjab, Haryana, Rajasthan, Himachal Pradesh, Delhi and Chandigarh. The common belief is that the new rules will take away Punjab’s control on the crucial dam headworks.

Water is a critical issue for both Khattar and Mann. Both states have stuck to their stand that depleting groundwater levels leave them with no choice in the matter. In Punjab, the water resource ministry data shows that 109 blocks out of 128 are in the ‘dark zone’ (severely depleted groundwater levels). Haryana needs the SYL water to irrigate farms in its southern parts. Officials here say groundwater levels in places like Gurugram district have fallen from a depth of 6.6 meters in 1976 to over 30 meters now. Haryana will not let go of Chandigarh even if it was inclined to unless Punjab relents on the water issue. The latter, meanwhile, says the water allocation system decided by the Balakrishna Eradi Tribunal in 1987—5 MAF (million acre-feet) water to Punjab and 3.83 MAF to Haryana—was faulty since it didn’t consider Haryana’s share of Yamuna water. Anyway, neither state had accepted these provisions and the dispute remains unresolved.

In 1960, after India signed the Indus Water Treaty with Pakistan, Punjab got use of the water from the tributaries. The 1966 reorganization recommended water-sharing with drier Haryana. Punjab has three rivers—the Ravi, Sutlej and Beas—whereas Haryana gets water from the Yamuna. The SYL canal was planned as a 214 km conduit that would connect the Sutlej and Yamuna. But when construction started in 1982, political parties in Punjab cried foul and have resisted every move to complete the construction. In fact, in July 2004, the then Punjab chief minister Amarinder Singh convened a special assembly session and passed the Punjab Termination of Agreements Act, 2004, which abrogated all river water agreements with neighboring states. In February 2017, the Supreme Court said Punjab would have to abide by its order on the SYL canal and it would pass a decree if the two states did not come to an agreement. Yet the SYL canal remains stuck, except for the occasional burst of political activity, like being raked up alongside the Chandigarh issue last week.

After the Aam Aadmi Party tsunami in the assembly election and with the general election due in 2024, political parties in Punjab are eyeing a consolidation. They need to be watchful, as an emotive issue like Chandigarh can stoke discontent in the state and have unpredictable repercussions. And that, for Punjab, would be a capital shame.