Vicky Kaushal’s love for singing is not hidden from anyone. He often shares videos of him humming various tracks. The actor just made our day by sharing his new post, wherein he can be seen singing a Punjabi track while sitting in his car. He is perfectly lip-syncing Diljit Dosanjh’s song Koka in the video he posted on social media.

Be it clicking a perfect selfie or singing, the Uri: The Surgical Strike actor knows how to make the most out of his time driving through the streets of Mumbai. Taking to his official Instagram handle, Vicky shared a video, wherein he can be seen channelling his inner Punjabi by lip-syncing to Diljit Dosanjh’s song Koka. The actor is seen donning a shirt and with it, Vicky is seen sporting a cool pair of sunglasses and a cap. The actor seemed to be pumped up to shoot for the day.

Check a glimpse of the video here: 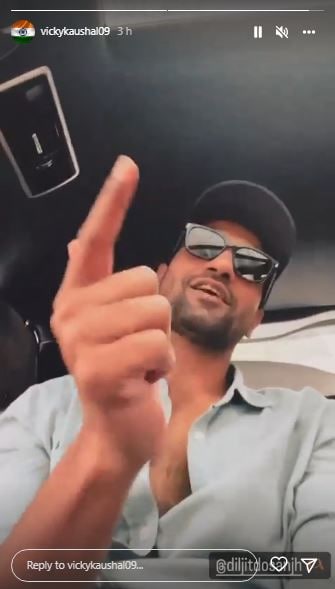 Well, this isn’t the first time the Masaan actor has impressed his fans with his talent of lip-syncing to Punjabi songs. Last year, Vicky took social media by storm after he uploaded a video of him lip-syncing Simran Kaur Dhadli’s song Barood Wargi.

The actor recently hit the headlines, when a set of pictures of the star couple – Katrina Kaif and Vicky Kaushal — went viral where the duo was spotted exiting a health clinic in Mumbai. No sooner than the pictures surfaced on social media, fans gushed about whether Katrina is expecting a baby.

The viral picture sparked curiosity among the fans who flooded the comment section with anticipatory remarks. While one Instagrammer questioned, “Good news… ?” another asserted, “She is pregnant I’m 100% sure.”

Katrina Kaif and Vicky Kaushal have become the talk of the town after reports of the former’s expected pregnancy hogged the Internet. However, reports claim that the Bang Bang actress might announce her pregnancy on director Karan Johar’s celebrity chat show, Koffee With Karan Season 7.

Katrina and Vicky tied the knot on December 9 in a dreamy and intimate ceremony. Katrina is gearing up for the release of her next film Phone Bhoot. Helmed by Gurmmeet Singh, the horror comedy stars Katrina Kaif, Ishaan Khatter, and Siddhant Chaturvedi in titular roles. Phone Bhoot is slated to hit the theatres on November 4 this year.

Meanwhile, on the work front, Vicky Kaushal will be seen next in Govinda Naam Mera, Laxman Utekar’s film with Sara Ali Khan and Sam Bahadur.

How to turn on disappearing messages in WhatsApp for Android, iPhone?