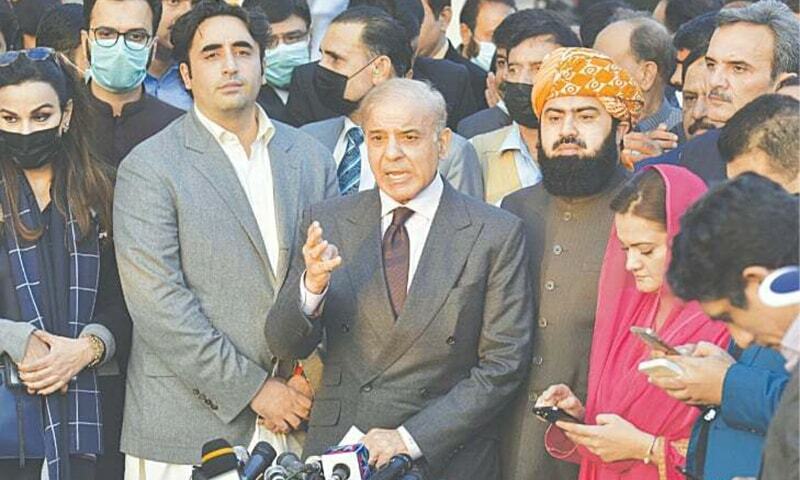 ISLAMABAD: The United Opposition in Parliament is meeting on Saturday (today) to decide how and when it will challenge the “illegal and unconstitutional bulldozing of law” by the PTI government in court through a joint sitting of Parliament on Thursday. Will give ,

Chairing the meeting of the Pakistan Muslim League-Nawaz (PML-N) Parliamentary Consultative Group, the Leader of the Opposition in the National Assembly Shahbaz Sharif decided to take up the issue with the United Opposition. The group supported the proposal of Sharif, who is the chairman of the PML-N, who challenged the passing of 33 bills in the joint sitting of the court.

Bills passed in the joint sitting include the use of Electronic Voting Machines (EVMs) and voting rights for foreign Pakistanis in the next general elections, and amendments to the Accountability Act, which extends the term until the National Accountability Bureau chairman is appointed. The new chief of the anti-corruption watchdog.

According to PML-N’s Information Secretary Maryam Aurangzeb, the meeting of the party’s Parliamentary Consultative Group took place in the opposition leader’s chamber in the Parliament House.

“The meeting discussed the issue of bulldozing the government’s legislation in a joint sitting of parliament and decided that a united opposition would challenge the fascism and unconstitutionality of the government inside and outside parliament,” he said.

talking dawnHe said the steering committee of the joint parliamentary opposition, including the Pakistan People’s Party (PPP), would meet on Saturday (today) to decide when and how the passage of the bills would be challenged in court.

“A legal panel of opposition parties will take an in-depth look at the pros and cons challenging the passage of the bills and prepare an innocent petition,” he said.

Asked whether the PPP agreed to jointly challenge the bills despite some differences with the PML-N, he said the PPP is part of a joint opposition in Parliament.

Initially, the PPP was part of the Pakistan Democratic Movement, but it left the coalition of opposition parties after Syed Yusuf was given a show-cause notice to unilaterally “withdraw” from its previously agreed formula for top Senate offices. . Nominated for Raza Gilani. The opposition leader’s office and began lobbying for it.

Ms Aurangzeb said the meeting of the PML-N group was informed about the challenge before a united opposition in court.

He said the meeting condemned the government’s threats in a joint session and said it was the first time in Pakistan’s history that electoral reforms were introduced without consensus.

Speaking at the meeting, Shahbaz Sharif said that the constitution did not give legal recognition to government law and termed the laws as “commandments” of Imran Niazi (Prime Minister Imran Khan).

He was quoted as saying: “The government, which is bombarding people with inflation, carried out a suicide attack on the Parliament. After being defamed by the people, the PTI government is now attacking the Constitution.

The PML-N president said that the statement of the Election Commission of Pakistan on the use of EVMs in the next general elections is proof of the wrongdoing of the government’s law on EVMs.

“Imran Niazi will no longer be allowed to rule Pakistan,” he was quoted as saying.

Sharif said that LPG, flour, sugar, medicine, electricity and gas are beyond the reach of the people and the government is sprinkling salt on the wounds of the poor, who cannot buy a kilo of flour or sugar. On the other hand, he said, the Prime Minister is showing people false dreams of a new and prosperous Pakistan.

The opposition leader said he appreciates the unity and spirit of the opposition. “The oppressors are the enemies of the people and criminals of the people who support a government that breaks the law, and will soon face exemplary justice,” he said.