21 people were killed and dozens injured in an attack on a southern resort town after missiles hit flats and a recreation center in Sergivka, 80 kilometers (50 miles) south of Black Sea port Odessa.

A neighbor told AFP on Saturday that rockets attacked residential properties in Solvinsk in the heart of the troubled Donbass region, killing a woman in her garden and injuring her husband.

Eyewitnesses said Friday’s strike was thought to use cluster weapons that had spread over a large area before the explosion, attacking buildings and people outside.

The attacks came after Moscow abandoned positions on a strategic island in a major setback for the Kremlin’s invasion.

In his daily address to the nation, Zelensky said a 12-year-old boy was among the victims of the Sergievka attacks, in which some 40 people were injured and the death toll could rise. 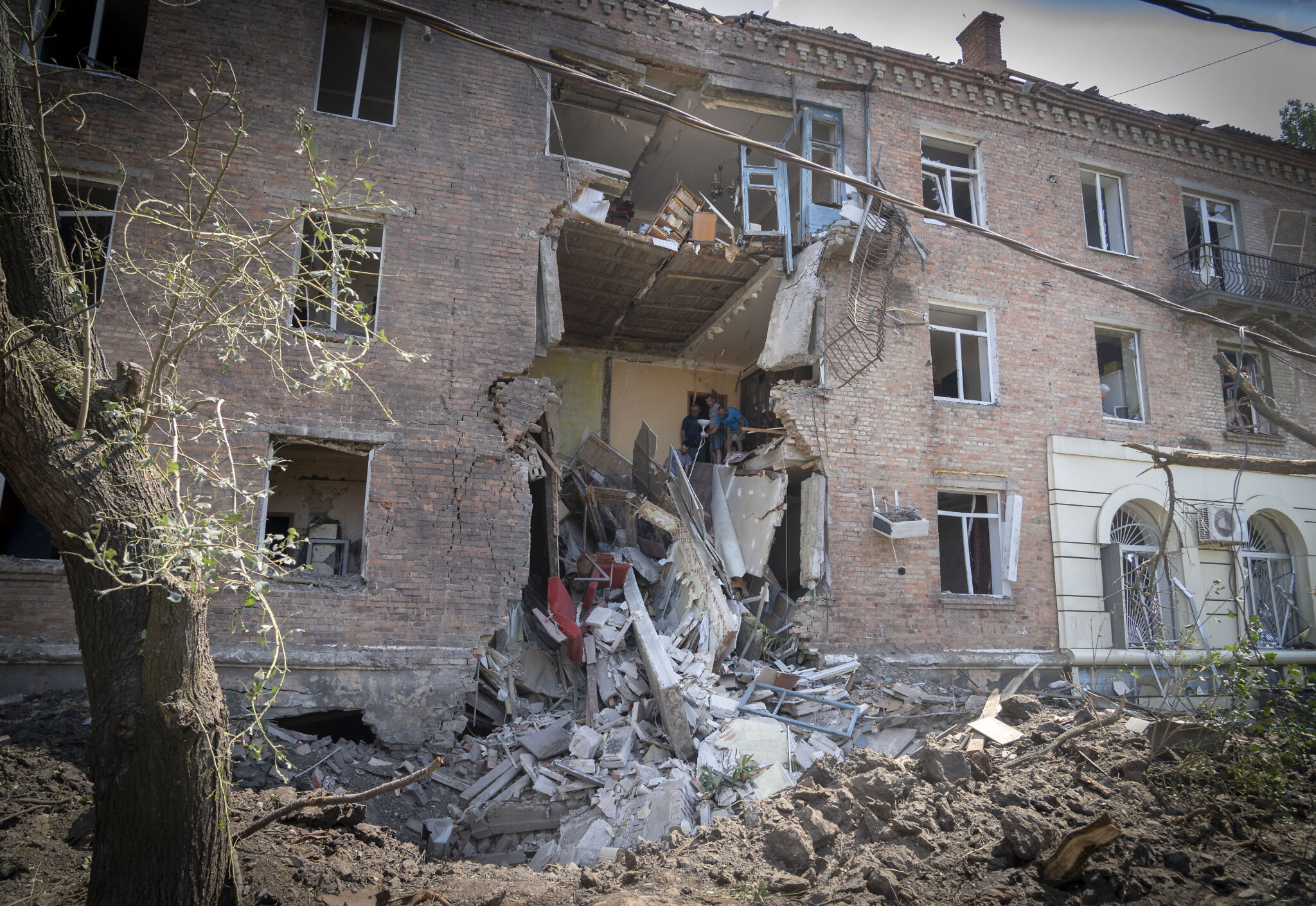 People salvage some of their belongings from a building damaged by a Russian rocket attack in the center of the city of Bakhmut in Ukraine’s Donetsk region on July 1, 2022. (AP Photo/Efrem Lukatsky)

“I emphasize: this is a deliberate, purposeful act of Russian terror – and not some sort of mistake or accidental missile attack,” Zelensky said.

“Three missiles hit a regular nine-story apartment building, which was hiding no weapons, no military equipment,” he said. “Regular people, citizens, lived there.”

Russian President Vladimir Putin has denied that his military was responsible for that attack and Moscow did not immediately comment on the Odessa attacks.

On Friday, Zelensky hailed a new chapter in its relationship with the European Union, with Brussels recently rated Ukraine’s candidate in Kyiv’s push to join the 27-member bloc, even though membership is years away. .

“Our journey to membership should not take decades. We must make it to this road quickly,” Zelensky told Ukraine’s parliament. 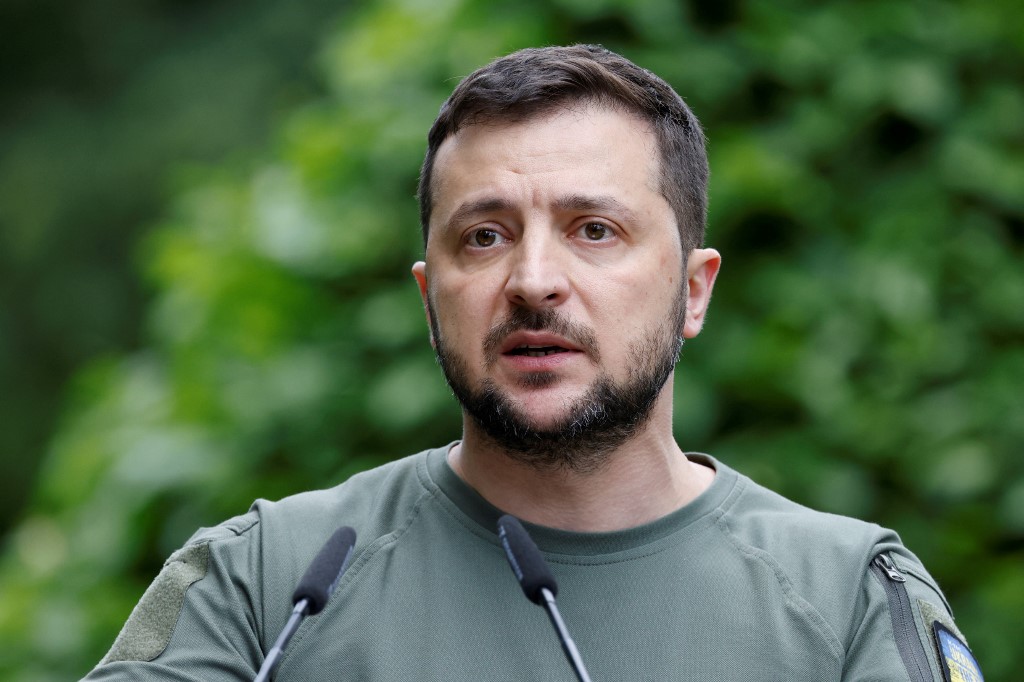 President of Ukraine Volodymyr Zelensky holds a press conference with the heads of state of France, Germany and Romania at the Mariinsky Palace in Kyiv on June 16, 2022. (Ludovic Marin/Pool/AFP)

Norway, which is not a member of the European Union, on Friday announced $1 billion in aid for Kyiv, including reconstruction and weapons.

And the Pentagon said it is sending a new $820 million armament package, which includes two air defense systems and more ammunition for the Hymer precision rocket launcher, which the United States began supplying last month.

In a decision that further cooled relations between Kyiv and Moscow, the UN cultural agency marked up The tradition of cooking borscht soup in the list of endangered cultural heritage of Ukraine.

Ukraine regards the nutritious soup, usually made with beetroot, as a national dish, although it is also widely consumed in Russia, other ex-Soviet countries, and Poland.

UNESCO said the decision was approved after a fast-track process inspired by Russia’s invasion of Ukraine. 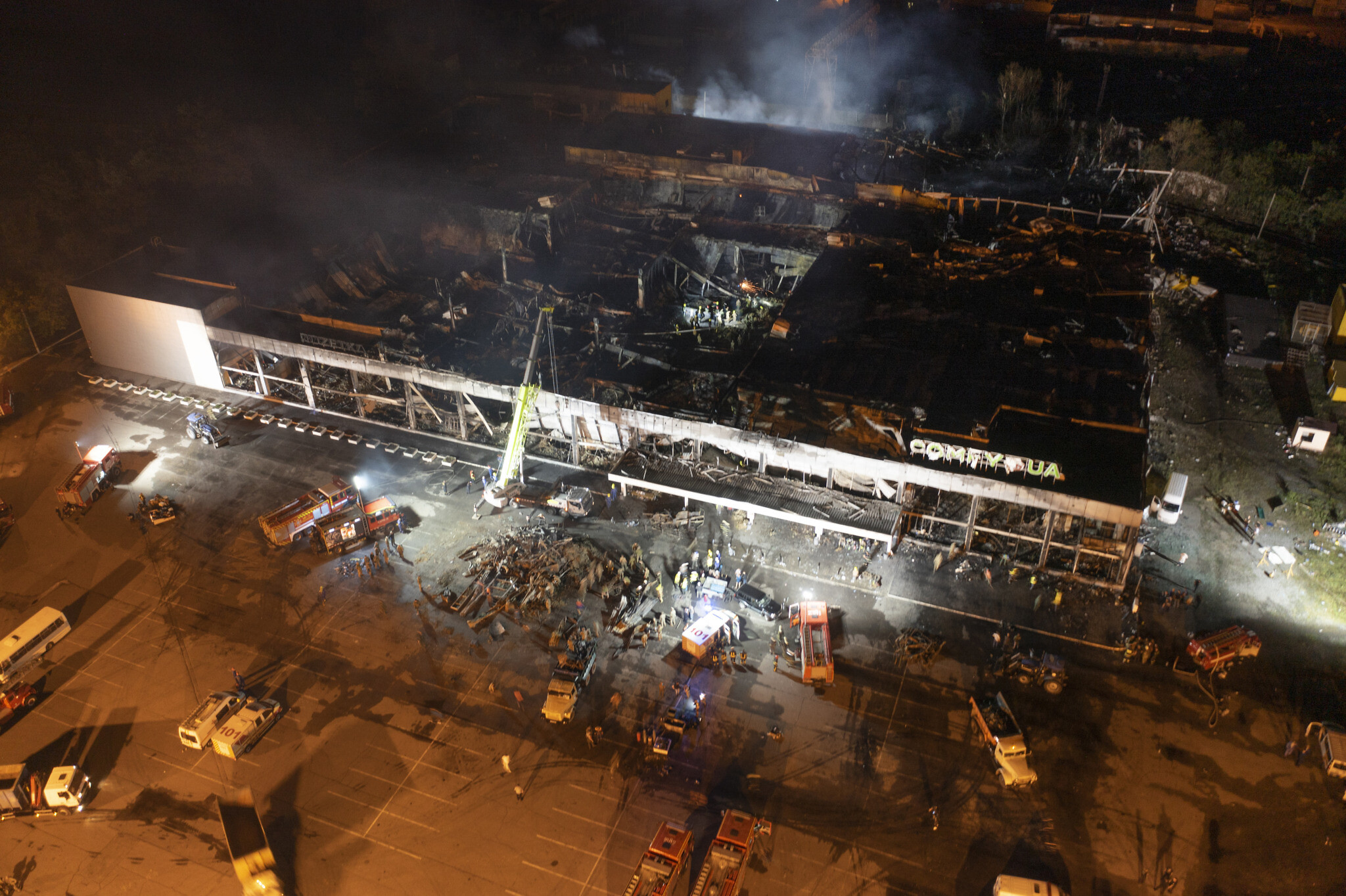 Ukraine’s State Emergency Service firefighters work to put out a fire at a shopping center burned down after a rocket attack on June 27, 2022 in Kremenchuk, Ukraine. (AP Photo/Efrem Lukatsky)

“We will win both in Borst and in this war,” Ukraine’s Culture Minister Oleksandr Tkachenko said on Telegram.

Russian Foreign Ministry spokeswoman Maria Zakharova said: “Hummus and pilaf are recognized as national dishes of many countries. Everything is subject to Ukrainianization.”

On Thursday, Russian troops abandoned their position on Snake Island, which had become a symbol of Ukrainian resistance in the first days of the war, and severed shipping lanes near the port of Odessa.

The Russian Defense Ministry described the retreat as “a gesture of goodwill”, meant to demonstrate that Moscow would not interfere with UN efforts to organize protected grain exports from Ukraine.

But on Friday evening, Kyiv accused Moscow of using incendiary phosphorus weapons to attack the rocky outpost, saying the Russians are “unable to even honor their own declarations.”

Western powers have accused Putin of using the cropped crop as a weapon to increase pressure on the international community, and Russia has been accused of stealing grain.

Ukraine on Friday asked Turkey to intercept a Russian-flagged cargo ship that Kyiv alleged had sailed from the Kremlin-held port of Burdiansk.

While heavy fighting continued in eastern Ukraine, officials said schools in the Ukrainian capital would reopen for in-person classes on September 1 at the start of the school year for the first time since lessons went online after the invasion began.

The head of Kyiv’s Department of Education and Science, Olena Fidayan, said the land around the schools would be tested for explosives and that school bomb shelters would be restored with essential items.