Three Nubian ibex were found dead on Saturday in the southern desert city of Mitzpe Ramon, with a fourth, in critical condition, later dying of what nature officials suspect as poison.

Wild goats, endemic to the desert mountain ranges of Jordan and Israel, are considered an endangered species, with fewer than 1,500 individuals estimated to remain in the wild.

Residents of Ein Akew Street reported the presence of animals in a WhatsApp group.

Rangers from the Israel Nature and Parks Authority searched the area, but found no preliminary evidence of poisoning.

INPA veterinarian Ronnie King said the bodies of the animals were taken for post-mortem to determine the cause of death.

“Perception at this stage is poison from an unknown source,” he said.

Last year, 12 venomous vultures were found in the Judean desert, a blow to the national population of only 200. 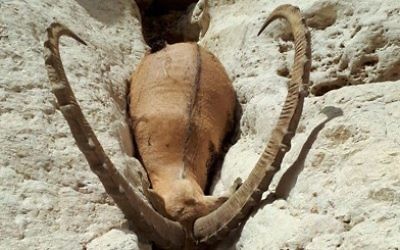 On July 15, 2017, a dead ibex was found after the wall of an evaporation pond collapsed, which released toxic wastewater into the Ashalim stream in southern Israel. (Israel Nature and Parks Authority)

One Amendment in Wildlife Act A proposal by Meretz MP Mosie Raz to make it easier to apprehend and prosecute perpetrators of such poisons passed its first reading in the Knesset last year, but has not moved forward since.

Five years ago, in the deserts of Judea, eight of a group of 26 ibex living in Israel in the north were killed when tons of acidic solution was poured. ashalim stream near dead sea

A collapse in the wall of a holding pool for phosphates – a waste product from making fertilizer – causes about 100,000 cubic meters of acidic water and other contaminants to escape a popular hiking route.

Khattar announces subsidy of up to Rs 25,000 for purchase of country cow