Sara Ali Khan The filmmaker will be seen in the upcoming episode of season 7 of the celebrity chat show Koffee With Karan. Karan Johar, she’ll be spicing things up on the couch Janhvi Kapoor, In the episode, Sara will talk about her breakup, ex and love life. In a clip from the trailer of the upcoming episode going viral on social media, Sara revealed who she would like to date from the film industry.

When Sara is asked about her love life, she reveals some secrets about her ex. Along with this, she says that she would like to date Vijay Deverakonda. The clip from the Koffee With Karan episode has gone viral on social media, with fans sending the two actors. Meanwhile, Vijay too noticed Sara’s interest and reacted to the same on Instagram.

Arjun Reddy star Vijay Deverakonda has reacted to Sara’s latest Koffee With Karan clip. In response to the Atrangi Re actress, Vijay wrote in his Instagram stories, “I love how you say ‘devarakonda’. Sweetest. Big hugs and sending my affection (heart emoji) (sic).” In the upcoming episode of Koffee With Karan 7, Vijay will also be reaching on the couch with his Liger co-star ananya pandey, 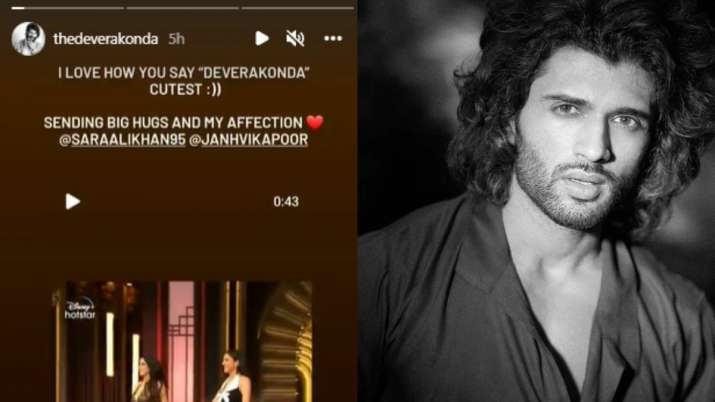 Vijay Liger: All you wanted to know

Vijay Deverakonda stars in the upcoming action film Liger opposite Ananya Panday. He is playing the role of a mix-martial artist in it. The film will showcase an underdog story wherein Vijay’s character will be seen climbing the ranks to become a world class MMA professional. The film is set to release on August 25. Puri Jagannath is the director of the film, which is backed by Karan Johar’s Dharma Productions. World famous boxer Mike Tyson also has a cameo role in Liger, which will also mark his debut in the Indian film industry. The trailer of Liger, the recently released song Akdi Pakpi and the poster of the film have created a lot of buzz ahead of its release.

Reading: Athiya Shetty-KL Rahul’s wedding preparations are in full swing, will the couple tie the knot in three months?

Vijay Deverakonda breaks silence on his nude poster for Liger, says ‘I have a body so…’