Mumbai: As Sharmila Tagore turned 78 on Thursday, her granddaughter and actress Sara Ali Khan penned a note for her, saying she aspired to be 1/10th of the veteran star. Sara shared a collage of pictures on Instagram on Thursday afternoon. The first is a throwback picture from Sharmila’s younger days, while she holds little Sara. In the second picture, a grown up Sara is hugging her “Badi Amma”.

For the caption, Sara wrote, “Happy birthday my dearest Badi Amma. Thank you for being our rock-solid pillar of support. I love you so much and I truly wish to be a 10th part of the woman you are.” #grace #beauty #intelligence.” 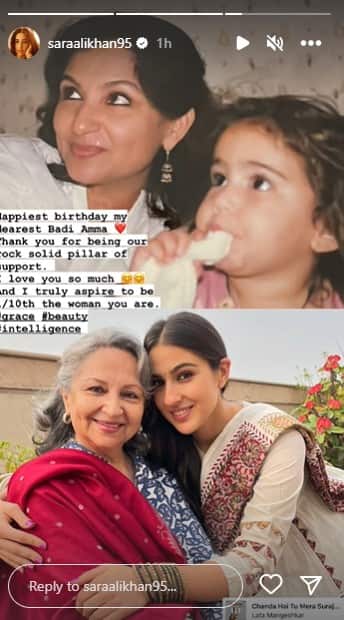 Sharmila made her acting debut at the age of 14 in 1959 with Satyajit Ray’s acclaimed Bengali play `The World of Apu`. He collaborated with Ray in several other films, including; Devi (1960), Nayak (1966) and Aranyer Din Ratri among many others.


Sara is the daughter of Saif Ali Khan’s first wife Amrita Singh. On the work front, she will be seen in ‘Gaslight’ alongside Vikrant Massey and Chitrangada Singh and Anurag Basu’s recently announced project ‘Metro…In Dino’ among many others. Sara made her debut in the Hindi film industry with Abhishek Kapoor’s tragic romance Kedarnath, in which she starred opposite Sushant Singh Rajput. She was last seen in Aanand L Rai’s ‘Atrangi Re’ alongside Akshay Kumar and Dhanush.