The lead prosecutor in Benjamin Netanyahu’s criminal trial considered resigning due to harassment and threats directed at her and her family by the Likud leader’s supporters, according to a report Sunday.

Without citing sources, the Globes news site reported that Deputy State Attorney Liat Ben-Ari told Justice Ministry colleagues in private meetings that although she planned to stay for now, she was weighed down by the ongoing vitriol directed at her and protests outside her home, and that she felt alone in the face of such attacks.

Ben-Ari was quoted by Globes as saying she felt a “deep sense of commitment, maybe stupidity,” and wished to continue managing her team, instead of allowing someone else to take over.

“In the meantime, I’m still staying. How much longer it can continue, I don’t know,” she reportedly said.

Ben-Ari has faced intense criticism, pressure, and threats from supporters of the presumptive incoming prime minister since the trial began in 2020, and security around her was increased that summer after police reportedly received intelligence that the danger had become more serious.

The prime minister’s defenders have harshly criticized Ben-Ari and other members of the justice system and law enforcement community whom they accuse, without evidence, of attempting to unseat Netanyahu for political reasons. 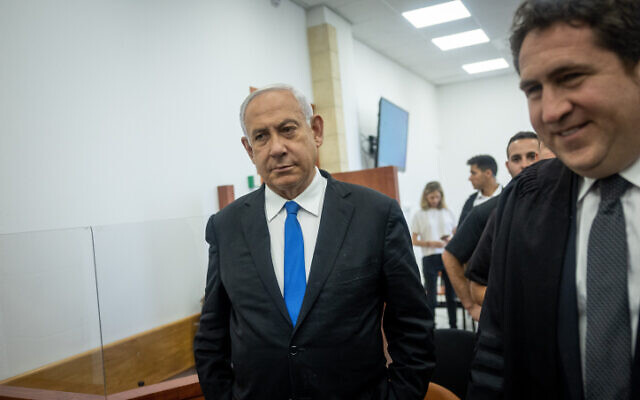 Former prime minister Benjamin Netanyahu arrives for a court hearing in his trial, at the district court in Jerusalem on May 31, 2022. (Yonatan Sindel/Flash90)

Last week, Attorney General Gali Baharav-Miara requested a restraining order against Likud activist Orly Lev, who is accused of harassing the senior prosecutor and her son in online posts.

Justice Ministry officials told Globes they feared that if Ben-Ari were to cave to pressure and resign, no other prosecutor would want to take up the case.

In response to the report, a Justice Ministry spokesperson said on behalf of Ben-Ari that the prosecutor had indeed discussed “feeling exhausted for different reasons,” but was committed to remaining in the role.

The Attorney General’s Office and state attorney condemned the harassment directed at Ben-Ari and praised her work in the role, adding that action was being taken against those involved in abuse.

“This week, a request was submitted to prevent threatening harassment against a member of Ben-Ari’s family. Also, criminal investigations were recently opened against those who harass witnesses and seek to influence the truth.”

I believe responsible coverage of Israeli politicians means presenting a 360 degree view of their words and deeds – not only conveying what occurs, but also what that means in the broader context of Israeli society and the region.

That’s hard to do because you can rarely take politicians at face value – you must go the extra mile to present full context and try to overcome your own biases.

I’m proud of our work that tells the story of Israeli politics straight and comprehensively. I believe Israel is stronger and more democratic when professional journalists do that tough job well.

Your support for our work by joining The Times of Israel Community helps ensure we can continue to do so.