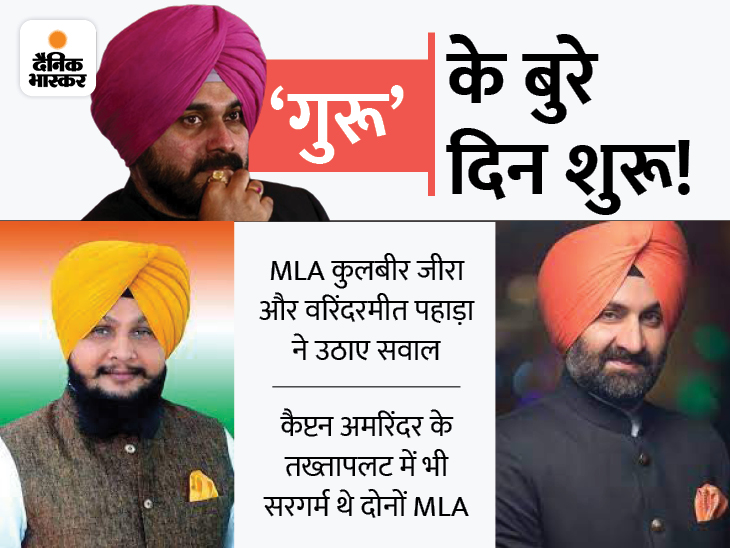 There is now a possibility of rebellion against Congress President Navjot Sidhu in Punjab. Congress MLAs Kulbir Zeera and Varindermeet Paha have raised questions on Sidhu’s attitude. He said Sidhu has issues but he should speak on the party forum. Both these MLAs are the same who were with the rebel group during the coup of Captain Amarinder Singh.

The tussle against Sidhu started when he attacked Sunil Jakhar on Friday. In response to this, Jakhar also exposed Sidhu through the lion of Akbar Allahabadi. The rebellion against Sidhu is now being linked to the support of the Taksali Congressmen and especially the veteran leaders of Majha. After this stand of Congress MLAs, Sidhu’s troubles may increase within the Congress.

Sidhu raised questions on Jakhar’s tweet
Navjot Sidhu held a press conference in Amritsar on Friday. In which Sidhu said about former Punjab Congress President Sunil Jakhar that who was the first President, tweets loudly. Sometimes he has raised such a thing as I am raising the issue.

Jakhar replied with a lion
Sunil Jakhar with Sidhu’s statement, Akbar Elahbadi’s Sher ‘Let us say Kafir, it is the will of Allah, the spots in the sun, the charisma of nature, the blessings that do not happen, there is a defect of intention. Jakhar apparently called Sidhu a kafir when he switched from BJP to Congress. He is making such rhetoric, for this he has been targeted by calling the will of the high command. He raised questions on Sidhu’s intentions that all was not well in the Congress.

These three ministers from Majha region in Punjab were at the forefront of the coup of Capt. Then all three were in support of Sidhu. Now their relationship with Sidhu has deteriorated.

2 big reasons for opposing Sidhu
Ticket concerns: The biggest concern of the MLAs regarding Sidhu is the ticket. Especially, those who have been staunch opponents of Captain Amarinder Singh. If he does not get a ticket from Congress, he will not get a place in the captain’s place either. Sidhu has said that tickets will be given only to those who have the ability to win and all MLAs should not think that they will get tickets.
Conflict with my group : Sidhu’s relations with Majha’s trio Deputy CM Sukhjinder Randhawa, Minister Tript Rajinder Bajwa and Sukh Sarkaria have deteriorated. Under the leadership of these three, the Captain was removed from the chair of CM. Now Sidhu targets Randhawa more on the pretext of CM Charanjit Channi for the STF report and sacrilege as he has the Home Ministry.

Statement against Sidhu for the first time, the captain has also raised questions
The rhetoric of Congress MLAs is important in the context of Congress politics. This is how it started when Captain Amarinder Singh was removed from the CM’s chair. After the rhetoric of some MLAs, it was given the form of rebellion.

Former CM Captain Amarinder Singh has also raised questions about Sidhu’s attitude. He has even called Sidhu ‘unstable’. This is the reason why Sidhu, who has been repeatedly targeting CM Channi and the government, has started protesting from within the Congress.