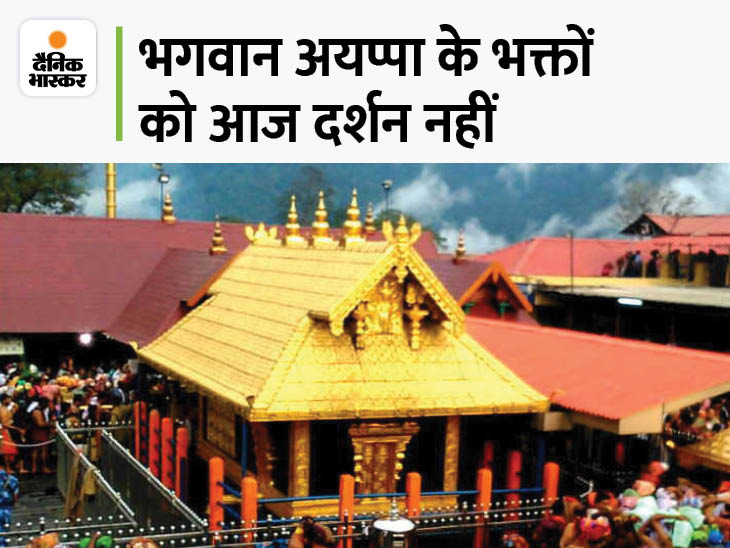 Rain has wreaked havoc in South India, including Tamil Nadu, Andhra Pradesh and Kerala, for the past one week. So far 17 people have died due to floods and rains in Andhra, while more than 100 people are missing. At the same time, the Sabarimala pilgrimage has been banned for a day on Saturday after heavy rains in Kerala. This has caused dismay among the devotees of Lord Ayyappa.

Pathanamthitta Collector Divya S Iyer said that it is raining continuously in the district. Due to this the water level of Pamba river has increased. Apart from the Pamba dam, the water in the Kakki-Anathode dam in the district is also above the danger mark. The administration has issued a red alert for the people living nearby.

Divya said that the devotees of Lord Ayyappa have been appealed not to go on pilgrimage today. Pilgrims who have booked online will be given a chance as soon as the weather is fine.

Devotees of Lord Ayyappa wait for the Sabarimala pilgrimage to begin in Pathanamthitta district.

A railway track was washed away after heavy rains and floods in Nellore district of Andhra Pradesh.

Process of Darshan at Sabarimala Temple

1. Sabarimala temple is open for devotees only from November to January in a year.
2. Devotees take bath at Pampa Triveni and light a lamp and make it flow in the river. Only then go to Sabarimala temple.
3. Devotees start climbing Pampa Triveni only after worshiping Lord Ganesha. The first stop is a place named Shabri Peetham.
4. It is believed that a Bhilani named Shabari did penance here during the Ramayana period. Shabari was liberated only after the incarnation of Sri Ayyappa.
5. Next to this comes a place named Sharanamkutty. Devotees who come for the first time pluck arrows here.
6. After this there are two routes to reach the temple. One common way and the other through 18 sacred steps. Only those who observe a strict fast for the first 41 days of visiting the temple can go to the temple through these holy steps.
7. 18 Devotees break a coconut filled with ghee near the holy steps. There is a Havan Kund near it. A piece of the coconut which is brought for Ghritabhishek is also put in this Havan Kund and a part is taken by the people to their homes as Prasad of the Lord.
8. A famous part of the worship of the deity in the Sabarimala temple is the anointing of ghee. Ghee brought by the devotees is first collected in a special vessel, then the Lord is anointed with that ghee.

Tough rules for visiting the temple

1. Devotees are required to observe celibacy, freed from all worldly bondage, for 41 days before coming here.
2. In these days, they have to wear only blue or black clothes.
3. A garland of Tulsi is to be kept around the neck and simple food is to be taken only once in the whole day.
4. Worship has to be done in the evening and one has to sleep on the ground.
5. On the completion of this fast, worship has to be done under the direction of a Guru Swami.
6. During the temple visit, they have to keep Irumudi on their head, that is, two bags and one bag. One contains a coconut filled with ghee and worship material and the other has food items. Taking this, they also have to circumambulate the Shabari Peeth, then they enter the temple through 18 steps.