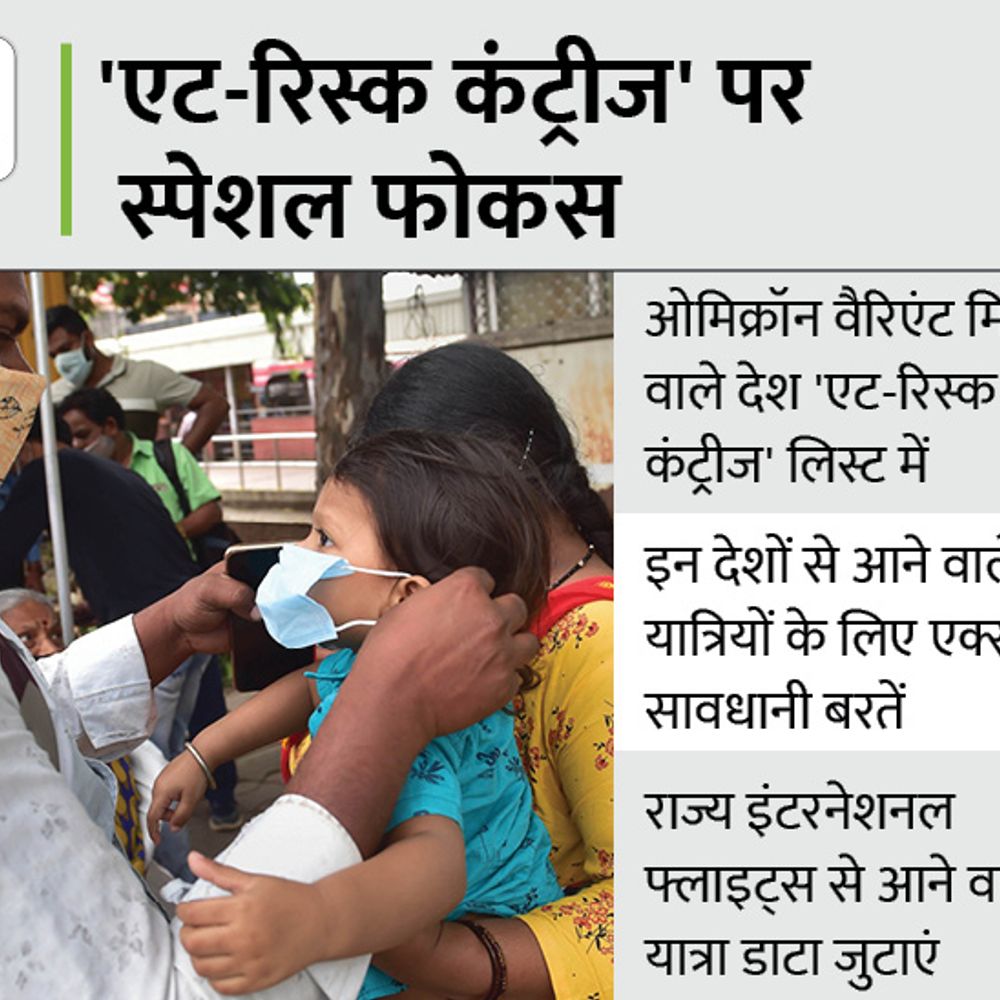 The effect of the atmosphere of concern created around the world regarding the new variant of Corona, Omicron, is being seen in the country as well. On Sunday, the central government directed the states to start preparations against the effects of the Omicron variant. Sufficient strictness has been asked for this.

Union Health Secretary Rajesh Bhushan has directed all states and union territories to strictly enforce quarantine and isolation with regard to Omicron. Along with this, everyone has been ordered to immediately increase RT-PCR testing and start active surveillance.

Let us understand in 8 points what is in the guidelines given to the states.
1. Variant of concern is Omicron, keep caution in that regard
The Center has said that Omicron is a variant of concern. Therefore it is necessary to catch it immediately. For this, do maximum testing and increase surveillance on hotspots.

2. Omicron-affected countries included in the list of ‘At Risk Countries’
Countries where this new variant of Corona has been found so far have been included in the ‘At Risk Countries’ list. Along with this, it has been ordered that extra precautions should be taken for the passengers coming from these countries and extra precautionary measures should be implemented. These measures include quarantining, conducting RT-PCR tests and monitoring those who came in contact with them. States should try to keep the positivity rate below 5%.

3. States should collect travel data at their level
The Center has said that a mechanism to get information about the past air travel of passengers coming through international flights already exists in every state. It should be reviewed by the states at their own level so that immediate measures can be initiated for the passengers coming from at-wrist countries.

3. Strictly Enforce COVID-Appropriate Behavior
The Center has reiterated that defense is the only real security. Therefore, the states and union territories should strictly follow the Kovid-appropiate behavior. Also increase the containment, keep surveillance active, increase the scope and speed of vaccination coverage so that this variant of concern can be effectively dealt with.

4. Keep Adequate Testing Infrastructure Ready
The Health Ministry has said that all the states should keep adequate testing infrastructure operational in their place so that any sudden jump in the number of infected due to this mutated virus can be dealt with. The ministry has given a clear warning to the states that in many states, the ratio of overall testing to RT-PCR tests has shown a decline. In the absence of adequate testing, it is extremely difficult to determine the exact level of spread of the infection.

5. Monitoring of hotspots should be done continuously
States have been asked to continue vigilant monitoring both in the areas listed as corona hotspots and in areas where there has been a sudden jump in the number of positive patients in the recent past. Along with this, orders have also been given to conduct saturation testing at hotspots and send all positive samples for genome sequencing in any case.

8. Keep an eye on virus changes through INSACOG
The Center has said that INSACOG (Indian SARS-CoV-2 Genomics Consortium) has been formed to monitor the mutations occurring in different variants of corona in the country, which is a multi-laboratory and its corona virus genomic variants can be monitored. There is a pan-India network for this.The Center has urged all the states to increase the sampling of the general public on a large scale to help them monitor the virus through INSACOG.

Avika Gore battling body image issues as a teen: ‘I used to hate myself so much’

Kerala once again tops ‘most welcoming region’ in India: Survey

Budget 2022: India may increase spending on infrastructure to support economy

Deputy CM Sukhjinder Randhawa confesses for the first time: I agreed to make me CM after the removal of Capt; then became chani