LONDON – Britain’s Prime Minister Boris Johnson on Saturday witnessed weekly drinking sessions by his staff during the coronavirus pandemic, setting up a wine fridge he bought specially for them.

The drip-feed threatened to overshadow a plan by Johnson to restart his embattled premiership, starting with the relaxation of ongoing pandemic restrictions later in the month.

Whether Johnson and his staff deliberately broke the law during the pre-lockdown is the central question being addressed in an investigation by senior civil servant Sue Grey, who may report back next week.

The Daily Mirror published A photo of a wine cooler delivered at the back door in Downing Street in December 2020, and said staff would regularly stock it with suitcase-loads of wine.

“Wine-time Friday” was scheduled at number 10 in the electronic calendar of about 50 employees, in clear violation of restrictions on indoor socializing during the pandemic, it reported. 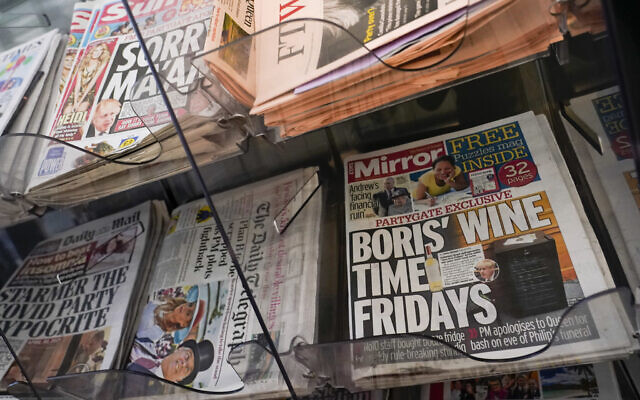 The front pages of British newspapers are displayed outside a newspaper in London on January 15, 2022 (AP Photo/Alberto Pezzali)

Johnson would often leave for a chat at the end of the work day, with a source quoted by the newspaper as saying: “The idea that he didn’t know there were drinks is utter nonsense.

“If the PM tells you to ‘let off steam,’ they’re basically saying it’s okay.”

In response, a Downing Street spokesman said the government was awaiting Gray’s investigation “to establish the facts surrounding the nature of the gatherings” during the pandemic. 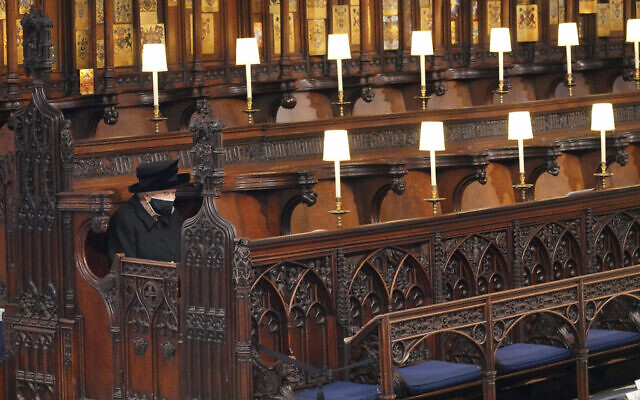 Britain’s Queen Elizabeth II sits alone at St George’s Chapel during the funeral of Prince Philip, who was with him for 73 years, on April 17, 2021 at Windsor Castle, Windsor, England (Jonathan Brady/Pool, via AP) file)

At least five Conservative lawmakers say they have filed letters demanding a no-confidence motion in Johnson, but according to reports, they plan to launch “Operation Save Big Dog” to save his leadership.

Johnson’s aides have been touting his achievements in office, including the delivery of Britain’s Brexit withdrawal from the EU, and The Independent newspaper said he would clearly oversee top staff.

But the opposition Labor Party, which has boomed in polls since “PartyGate” revelations began last month, said Johnson was ineligible for office.

“We are witnessing the broken spectacle of a prime minister shrouded in deceit and deceit, who is incapable of leading,” Labor leader Keir Starmer was expected to say in a speech later on Saturday.