accepted by the panel of judges plea agreement Arrived in the case in September. As part of the plea deal, allegedly agreed upon by Ben-Ami’s ex-wife, he fully confessed to his crimes and accepted responsibility.

The severity of the sentence handed down by the judges means that 35-year-old Ben-Ami will only be able to request an early release after serving 55 years in prison.

In March 2020, Hod Hasharon’s Ben-Ami stabbed his daughter Goni to death and attempted to kill his then-wife Liron Dror and their other daughter and then took his own life. Dror and a 3-year-old child were seriously injured in the attack.

A month later, Ben-Ami was Was accused with one count of grievous murder and two counts of attempt to murder. Prosecutors wrote, “The defendant’s violent, aggressive and brutal acts, during which he did not hesitate before attacking and stabbing his daughters and wife several times, all by a ludicrous argument, displayed his threat to public safety.” is,” prosecutors wrote.

According to the indictment, Dror was sitting on the couch holding his youngest daughter when Ben-Ami punched her in the face, pushed her and strangled her as he tried to stop her. Soon after, the defendant went into the kitchen, grabbed a knife and stabbed her in the throat. She fell to the ground while the child lay on the couch. According to the indictment, Ben-Ami repeatedly strangled and stabbed his wife in the neck and chest, then stabbed his 10-month-old in the neck and chest, and also with his 3-year-old daughter Did the same. , 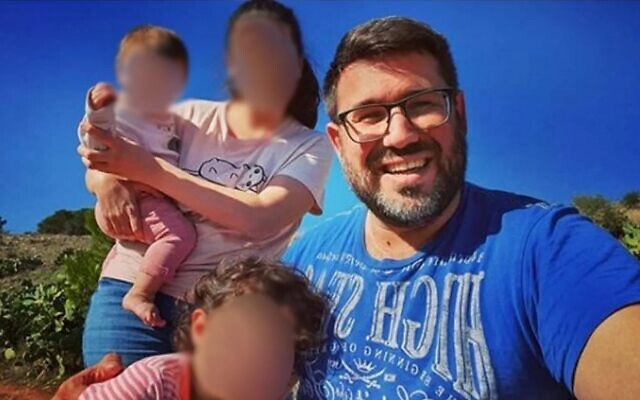 Barack Ben-Ami with his wife and two daughters. (courtesy)

At some point, Dror managed to get up and tried to get out of the apartment to call for help. But Ben-Ami grabbed him and stabs him again. Still, he made it to the yard and started yelling, the indictment said. The defendant followed her, grabbed her by the hair and hit her again in the stomach, causing her to fall to the ground. The indictment states that the suspect then tried to drag her by the foot to the apartment, but gave up when people started arriving at the scene.

Ben-Ami then returned to the apartment, where he strangled his 3-year-old and inflicted multiple superficial wounds on his neck in an attempt to take his own life with another knife. When others arrived at the apartment, the defendant finally stopped his anger. His innocent daughter did not survive the attack.

In a statement to reporters after judges accepted the plea deal on Wednesday, Ben-Ami’s ex-wife Liron Dror thanked the court “for giving us a few more years of silence so that my daughter can reach adulthood where she is.” even when he comes looking for her on leave to fulfill his mission.”

“This man is a monster. I know in my bones that domestic abuse continues even when the perpetrators are behind bars. The state must fight these domestic terrorists. Help my surviving daughter, women and children, hold your own above water.” Raise your head and live without fear of this monster and its metastases,” she said.

On Independence Day, Vivek Agnihotri Thanks CRPF Officers for ‘Protecting Me During This Turmoil’