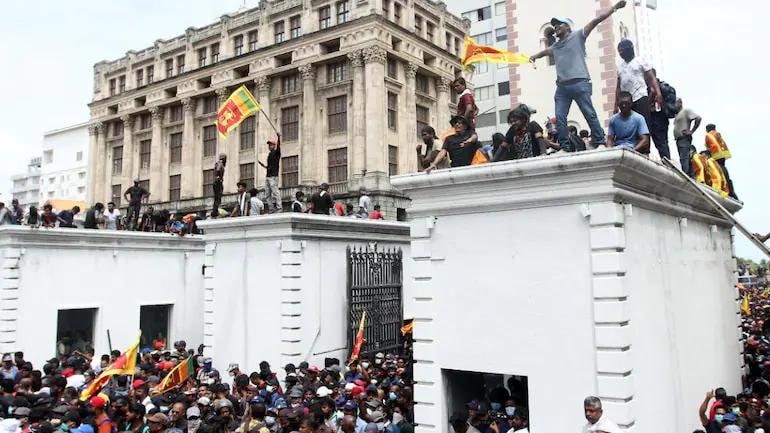 Sri Lanka is grappling with massive civil unrest, with citizens taking to the streets (Photo: AFP)

The Maldives National Party (MNP) on Wednesday expressed unhappiness over the Maldivian government’s decision to allow Sri Lankan President Gotabaya Rajapaksa to visit the country and said it would present a resolution seeking an explanation from the Solih government.

In an interview with PTI, MNP leader and former Maldivian Foreign Minister Dunya Maumoon said that it is very disappointing that the Maldivian government did not care about the sentiments of the Sri Lankans.

Rajapaksa, the 73-year-old leader who is exempt from prosecution while he was president, fled to the Maldives with his wife and two security officials to avoid the possibility of arrest by the new government.

After protesters stormed his official residence on Saturday over the island nation’s worst economic crisis, Rajapaksa had informed Speaker of Parliament Mahinda Yapa Abeverdane and Prime Minister Ranil Wickremesinghe that he would resign on July 13.

Stating that Rajapaksa also has “considerable responsibility” for the current economic crisis in Sri Lanka, Maumoon said there are a good number of Sri Lankans in the Maldives who are saddened by the action of the Solih government. He said that there are reports that they are planning some kind of protest in Maldives.

Maumoon, the daughter of former Maldivian President Maumoon Abdul Gayoom, said, “My party will table a resolution in the Parliament (People’s Majlis), seeking an explanation from the government on the matter.”

He also said that the Sri Lankan leader was staying at a resort in Maldives.

Sources said that Maldivian Parliament Speaker and former President Mohamed Nasheed had held talks with Rajapaksa to flee the country.

The Maldivian government argues that Rajapaksa is still the President of Sri Lanka, and has not resigned or delegated his powers to a successor. So, if he wanted to travel to Maldives, it could not be ruled out, sources said.

Reading: Will Sajith Premadasa be the next leader of Sri Lanka?
Read also: Sri Lanka crisis in satellite imagery

Neena Gupta Gives a Glimpse of Her Fun Salsa Session At Home; Tahira Kashyap Says ‘You Are Amazing’