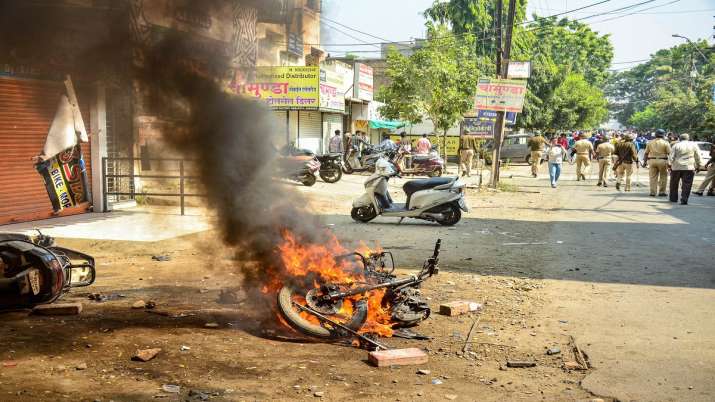 The police in Nanded district of Maharashtra has arrested 35 people so far after the violence that took place a few days back against the recent communal violence in Tripura. Officials gave this information on Sunday.

He said that at present the situation is peaceful in Nanded, where stones were pelted on a police van on Friday, in which two policemen were injured.

A senior police officer said the violence took place in Wazirabad area and Deglur Naka in Nanded city and they have estimated the damage to be around Rs 1 lakh.

Superintendent of Police Pramod Kumar Shewale told PTI, “There are four cases registered in Nanded regarding the incident. Nanded Police has so far arrested 35 people allegedly involved in the incident. The situation is now under control and peaceful. “

Cases have been registered in various offences, including damage to public property, a senior official said.

Stones were pelted at various places in Maharashtra’s Amravati, Nanded, Malegaon (Nashik), Washim and Yavatmal on Friday during rallies taken out by some Muslim organizations to protest the alleged communal violence in Tripura.

Curfew was imposed in Amaravati city on Saturday after a mob pelted stones at shops during a bandh allegedly organized by the BJP to protest rallies taken out by members of the minority community.

Hundreds of people, many of them carrying saffron flags and raising slogans, took to the streets in Rajkamal Chowk area on Saturday morning.

An official earlier said that the police resorted to lathi-charge to control the situation.

People in Amaravati are not allowed to step out of their homes, except in case of medical emergencies and as per the police order, gatherings of not more than five people are allowed.

Maharashtra Home Minister Dilip Walse-Patil on Friday said that the state-wide march to protest against the violence against the Muslim community in Tripura has turned violent at some places, but the situation is under control.

He had appealed to the people in Maharashtra to maintain peace and not to believe in rumors and said that those found responsible for the violence during the protests would be punished.