Amid the ongoing Alwar Temple demolition controversy, Rajasthan Minister Mahesh Joshi said that making issues in the name of temples has become a fashion now.

Talking to ANI on the incident, Mahesh Joshi said, “I’m sorry to say, it has become a fashion; issues are made in the name of temples now. We respect temples, we’re more religious than people from BJP… We don’t use religion for vote bank.” 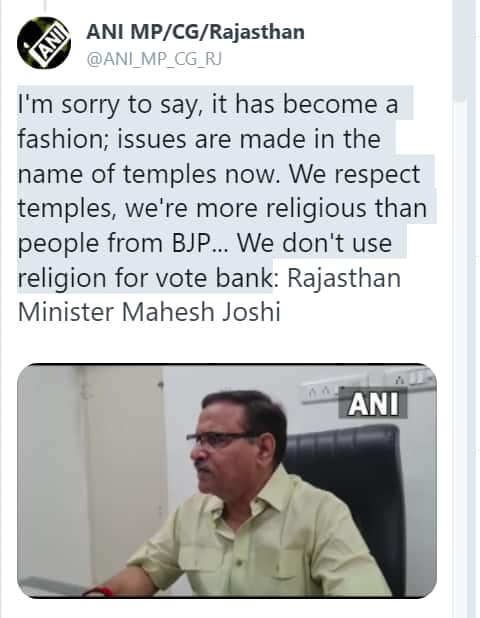 The leader also accused BJP of using issues of religion for politics and vote bank.

The comments came after BJP leaders on Friday expressed outrage after a 300-year-old Lord Shiva temple in Alwar district`s Rajgarh town was demolished.

The video of the temple demolition is going viral on social media putting the Congress government of Rajasthan in the dock.

However, the ruling party has washed its hands off the demolition claiming that the Rajgarh municipality is being ruled by the BJP and the action has been taken by the saffron party workers.

Congress state president Govind Singh Dotasara told a press conference that the BJP is playing politics on the issue.

“In 2018, the BJP Mandal President wrote a letter to the district collector recommending the removal of this encroachment. As there is a BJP board in Rajgarh being headed by Satish Guharia, the resolution to remove this encroachment was passed in their board meeting. Thereafter , encroachment was removed. Temples are not tampered with in the Congress government, this has been the agenda of the BJP,” he added.

Veteran Congress leader Jitendra Singh said, “It is unfortunate that the encroachment drive was ordered by the BJP Board and Chairman of the Nagar Palika Rajgarh to make the Gaurav Path also sanctioned by the last government without taking the local people into consideration.”

Meanwhile, the local administration said that the action to remove the encroachment was taken as per the master plan.

Bharatiya Janata Party state president Satish Poonia however questioned how can a 300-year-old temple be an encroachment?

“The BJP is sending its team to the spot, which will give its report in three days,” he added.

BJP IT Cell chief Amit Malviya shared a video of the incident on Twitter and said “Shedding tears on Karauli and Jahangirpuri and hurting Hindus` faith — this is what the secularism of Congress is all about.”