Israel has rejected a US request to hand over ten Hawk anti-aircraft batteries and hundreds of interceptor missiles for delivery to Ukraine in recent weeks, according to a report on Wednesday.

Dror Shalom, who heads the Defense Ministry’s Political-Military Bureau, told the US Department of Defense that Israel has not changed its policy of not sending weapons to Ukraine, and according to the Walla news site the defensive weapons are obsolete anyway, citing three Israeli officials.

The report said the weapons were kept in storage in Israel.

Officials told Walla that the answer given to Washington was not genuine because the interceptor missiles originally supplied to Israel in the 1960s could be refurbished.

US officials told Walla that similar requests had been made to other states that still use Hawk systems, and that also have systems in storage.

Defense Secretary Lloyd Austin mentioned the request in a speech to the pro-Israel AIPAC lobby group earlier in January.

“The Hawk system helped make Israel more secure during the Six-Day War, Yom Kippur Va and beyond,” Austin said. “And as Russia brutally targets the cities and citizens of Ukraine, we are working with our allies and partners to provide Hawk capability to the independent government of Ukraine.” 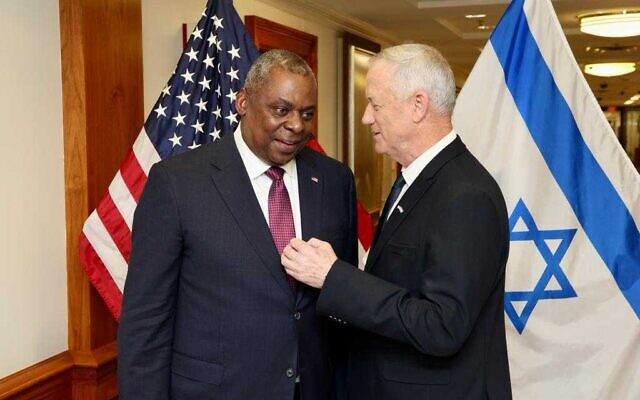 Defense Secretary Benny Gantz meets with his US counterpart Lloyd Austin at the Pentagon on May 19, 2022. (Schmullick Alumni / GPO)

Israel has opposed providing arms to Ukraine since the beginning of Russia’s invasion. A major reason for Israel’s hesitation appears to be its strategic need to maintain freedom of operations in Syria, where Russian forces control large swathes of airspace.

The issue has strained relations between Jerusalem and Kyiv, as Ukrainians continue to pressure Israel to provide more defense aid. Earlier this month, Ukraine’s ambassador urged Israel to supply the missile defense system to his country in the wake of repeated deadly attacks by Russia.

Israel has provided large amounts of humanitarian aid, as well as other types of aid, to Ukraine, and the new government under Prime Minister Benjamin Netanyahu has said it intends to continue those supplies.

the new York Times Reported Earlier this month the US military was quietly shipping hundreds of thousands of artillery shells to Ukraine from massive stockpiles in Israel.

The New York Times, citing American and Israeli officials, reported that the weapons were stored for the US to use in regional conflicts, and that Israel is allowed to use some supplies in emergency situations.