NEW YORK — A senior Israeli official condemned on Wednesday the decision by Russian President Vladimir Putin to mobilize hundreds of thousands of reservists for the war in Ukraine.

“We have condemned in very clear language incidents like Bucha,” said the official, referring to the Kyiv suburb where Russian soldiers executed Ukrainian civilians. “This falls under that. This call-up of 300,000 additional soldiers to further deepen a war that didn’t need to happen in the first place. The same of course goes for the threats to use nuclear weapons.”

The Russian leader, in a seven-minute televised address to the nation aired on Wednesday morning, also warned the West that he isn’t bluffing over using all the means at his disposal to protect Russia’s territory, in what appeared to be a veiled reference to Russia’s nuclear capability.

Putin has previously warned the West not to back Russia against a wall and has rebuked NATO countries for supplying weapons to help Ukraine.

The first reserves mobilization in Russia since World War II came amid recent battlefield losses for the Kremlin’s forces.

Israel has sought to avoid aligning too closely with either side since the conflict began on February 24. It is one of the few countries that maintains relatively warm relations with both Ukraine, a fellow Western democracy, as well as Russia, which controls the airspace over Syria in which Israel operates to target Iranian proxies.

Israel’s stance hasn’t changed markedly since Lapid took office in June, but ties between Israel and Russia soured over the summer after a series of incidents stoked tensions. 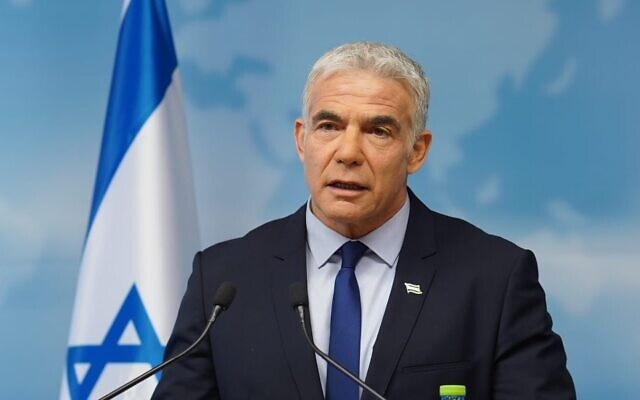 In May, Russian Foreign Minister Sergey Lavrov sparked a diplomatic storm after he said Adolf Hitler “had Jewish blood,” and that Jews are among the worst antisemites. In the aftermath of the incident, Russian President Vladimir Putin called Bennett, offering an apology for Lavrov’s comments.

Russia’s Justice Ministry in June warned of its intention to shutter the Jewish Agency, which encourages and facilitates Jewish immigration to Israel. The fate of the Israeli quasi-governmental organization remains unclear as the trial was recently postponed until October.

In July, Russian anti-aircraft missiles were fired at Israeli Air Force jets over Syrian territory as the planes targeted Iranian military sites near the city of Masyaf in northwestern Syria. The anti-aircraft missile system is Russian-operated and can only be fired with Russian approval.

In response, Defense Minister Benny Gantz said it was a “one-off incident.”

The senior Israeli official added Wednesday that he is “worried in general for the Jews in Russia,” and that Lapid asked the El Al airline’s CEO on Monday to ensure that flights from Russia to Israel continue, enabling Jews to leave.

Putin’s mobilization decree stipulated that the number of people called to active military duty will be determined by the Defense Ministry. Defense Minister Sergei Shoigu said in a televised interview that 300,000 reservists with relevant combat and service experience would initially be mobilized.

The decision was seen as an escalation from Russia, as well as a risk for Putin, since the mobilization may boost opposition to the war in Russia.

A spokesman for Ukrainian President Volodymyr Zelensky called the partial mobilization of Russian reservists a “big tragedy” for the Russian people.

AP contributed to this report.

Did You Know Gout Flares Can Increase The Risk of Heart Attack?