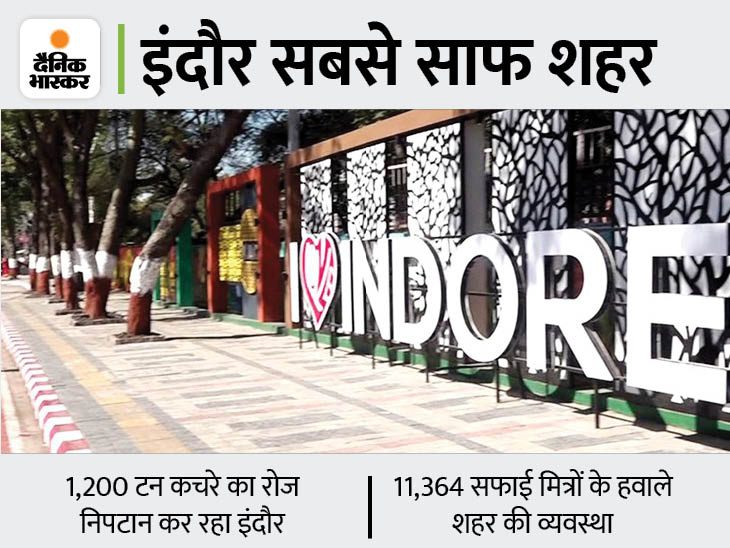 Indore in Madhya Pradesh has become the cleanest city in the country for the fifth time in a row. On Saturday, President Ram Nath Kovind awarded Indore the number one city, Safai Mitra of 12 crores and 5 star rating at Vigyan Bhawan in Delhi. Surat and Vijayawada have been placed after Indore in this list.

160 crores were spent for the first time, now only 50 crores annually
For the first time, 160 crores had to be spent on waste management due to purchase of vehicles and construction of transfer stations. Now this expenditure has come down to 50 crores annually. Last year 90% waste management fee was collected, which was 45 crores. The quality of wet waste is 95%, not so in Germany.

Earning 20 crores from waste, will cross 100 crores in three years
Indore is currently earning Rs 20 crore annually from waste. This includes income from carbon credits, CNG, compost manure, CND waste and dry waste. Experts believe that the speed with which Indore is working on waste management, our earnings from waste will cross the 100 crore mark in the coming three years.

That’s why we are number one in the whole country

Impact on the economy: 1.74 lakh crore GDP
Indore has emerged as a big brand with consistent good performance in cleanliness. Bhaskar’s study with IIM Indore revealed that the GDP of Indore has reached 1.74 lakh crore in these five years. The investment figure has also gone up to 30 thousand crores. IIM Chairman Dr. According to Himanshu Rai, if this pace continues, the industry will grow one and a half to two times in 5 years. Indore will be one of the most employable cities in the country.

Number of industries can reach one and a half times in 3 to 5 years
1. In March 2021, Indore got the first rank in the Municipal Performance Index of the country and 9th in the Ease of Living Index. Earlier we were nowhere in the top 20.
2. After Hyderabad and Pune, Indore Corporation listed the bond on the Debt Securities Platform of the National Stock Exchange. Issued bonds worth 100 crores with green shoe option of 70 crores.
3. GDP of Indore reached 1.74 lakh crore in five years. A change of about three times was recorded in this. We topped in the entire MP and the total share was 19 percent.
4. All the big industrial groups of the country are ready to come to Indore, 7 investor summits were held in MP, 6 in Indore. Investment in the industry reached 30 thousand crores, which was 10 thousand crores 5 years ago.

Impact on health: 80 percent reduction in malaria-diarrhoea cases
With the change in the appearance of the river, the health of the city has also changed. There has been a tremendous decline in the cases of water-related diseases among the people living along the river banks. Bhaskar’s investigation on doctors of Chandannagar, Biratnagar, Azadnagar, Musakhedi and Piliyakhal, Sanjeevani Kendra, Civil Dispensary revealed that there has been a reduction of up to 80 percent in diseases caused by dirty water in these areas.

Biratnagar: Dr. Rajesh Kumar and Dr. Kamal Gurjar tell that earlier daily 20 to 25 patients used to come with diarrhea etc., now 3 cases come. There are only one or two cases of malaria in a week.
Chandannagar: Dr. Bindu Kumar Jain and Dr. Khalida Qureshi of Sirpur tell that before water borne diseases, more than 30 patients used to come daily, now 3 to 5 are left. Malaria has remained non-existent.
Azadnagar: Dr. Nazim Hussain says that daily more than 100 patients used to come with diarrhea, typhoid and malaria. Ever since the drain has been cleared, not more than 25 cases came in a day.
Jaundice Skins: Dr. Jeevan Agarwal of Sitaram Park says that earlier there were more than 15 cases of malaria and diarrhea, now only 5 come. Vomiting and diarrhea cases have reduced by up to 80%.
Musakhedi: Dr. BS Sen of Shahinagar Musakhedi says that dengue cases are being found but the cases of gasenteritis with malaria, typhoid and diarrhea remain one third.

the cost is also reduced by half
Due to the reduction of up to 80% in the cases of typhoid, diarrhea and malaria, the expenditure on treatment of the people of these areas has also come down by 55%.