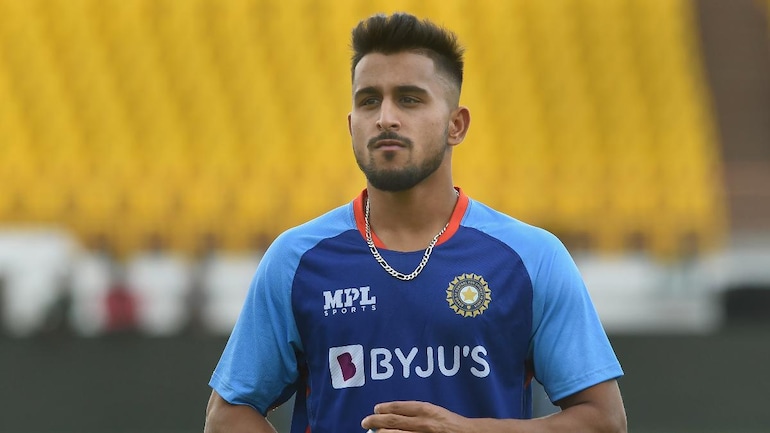 Umran Malik was included in the Indian squad for the two-match T20I series against Ireland, despite not going against South Africa in the recent home series. (courtesy: PTI)

Bhuvneshwar Kumar credits the Indian Premier League for Umran Malik’s debut for India in T20I cricket. Malik’s pace came into limelight during the 2022 edition of the IPL when he was playing for Sunrisers Hyderabad.

The 22-year-old got his India cap from Sunrisers and now India teammate Bhuvneshwar ahead of the first T20I against Ireland, which India comfortably won by seven wickets.

“Umran and other youngsters around the world have made their debut because of the IPL which is fantastic,” Bhuvneshwar said after the match.

A dream come true moment!! Congratulations to Umran Malik who is all set to make his T20I debut #teamindia

Malik took 22 wickets in his 14 outings for Sunrisers in the recent IPL, a memorable outing. He became the fourth-highest wicket-taker overall and the highest wicket-taker for Sunrisers in the 2022 season. His impressive performance opened the door to the Indian dressing room as BCCI included him in the squad for the home T20I series against South Africa.

Although Malik did not get a game against South Africa, he was named in the Indian squad for the two-match T20I series against Ireland. In his first outing dressed in India colours, the pacer bowled just one over and conceded 14 runs.

Meanwhile, Bhuvneshwar was struck early by skipper Hardik Pandya to put Ireland to bat. The veteran pacer took a wicket and conceded 16 runs in his three overs, which included a maiden over.

Talking about his own performance, Bhuvneshwar said: “There was swing with the new ball, it got better after 5-6 overs. Thought it would get tough with moisture, but didn’t. Test match. It’s good to bowl line and length. Glad it worked out. We get good support wherever we go.”

India will take on Ireland in the second T20I in Dublin on 28 June.

Another monkey virus may be on verge of infecting humans: Researchers