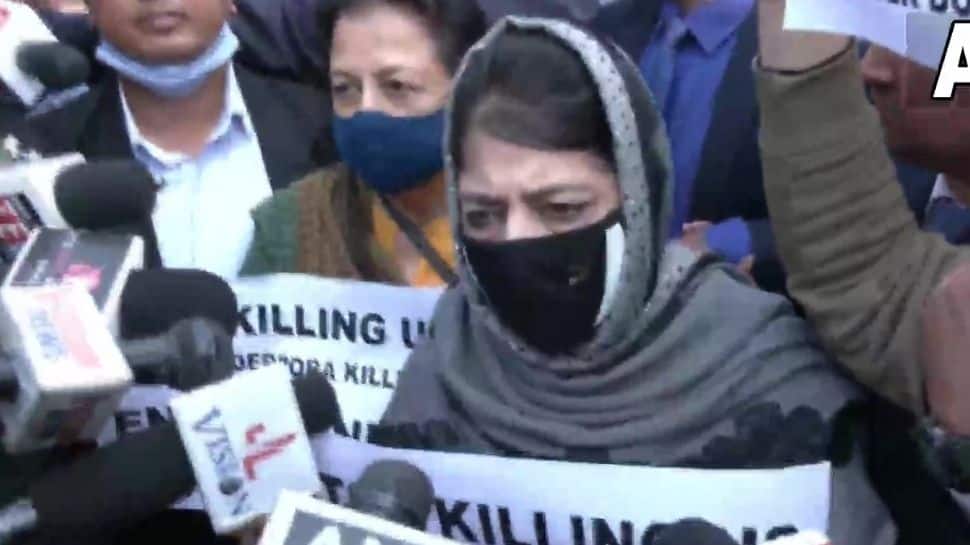 New Delhi: Amid the outcry over the Hyderpora encounter, Peoples Democratic Party (PDP) chief Mehbooba Mufti on Wednesday (November 17) agitated with party leaders against the alleged killing of civilians.

Protesting outside the PDP office, Mufti was quoted by ANI as saying, “I am protesting because this government kills civilians in the name of militancy. No one knows that terrorists are being killed. Recently three civilians were killed.” The government has refused to hand over the bodies to the families despite the latter’s demand.

I am protesting because this government kills civilians in the name of extremism. No one knows whether terrorists are being killed or not; Recently 3 civilians have been killed. Government refused to hand over their bodies to families despite their demand: PDF chief Mehbooba Mufti pic.twitter.com/nQStxVg5Jb

Mufti told media persons that the kin of the slain civilians are protesting in Srinagar and demanding the handing over of their bodies.

According to PTI, the PDP chief alleged that since the Armed Forces Special Powers Act (AFSPA) was invoked, there is no accountability for killings of innocents.

The protests came after four people, including two civilians, were killed in firing by security forces during an anti-militancy operation on Monday evening.

Earlier on Tuesday, former Jammu and Kashmir Chief Minister Mehbooba Mufti had demanded a judicial inquiry into the matter. Hyderpora encounter in Jammu and Kashmir, “It is unfortunate that three civilians were killed in the (Hyderpora) encounter. It has become a fashion to brand civilians killed in encounters as OGWs. They have no evidence to show that they are Over Ground Workers (OGWs). Such incidents cause more anger among people against us. We want a judicial inquiry into the incident. The culprits should be given strict punishment,” Mufti had said.

According to the Jammu and Kashmir Police, Haider, a Pakistani terrorist, and his local aide Mohammad Amir, along with two civilians – Altaf Bhat and Mudassir Gul – were killed in an encounter in Hyderpora area, where an illegal call center and a terror hideout were allegedly held. As it was. is being run.