new Delhi: Hrithik Roshan and alleged girlfriend Saba Ajab recently had a fun time with their friends in Goa. The actors were earlier seen walking hand-in-hand at the Mumbai airport on Tuesday, making their rumored relationship airport official.

Hrithik and Saba were also joined at the party by the actor’s ex-wife Sussanne Khan and her boyfriend Arslan Goni. Many pictures of these four spending gala time together are becoming viral on social media. The pictures clearly prove that Hrithik and Sussanne had an amazing time with their respective partners. Actress Pooja Bedi has shared pictures of get-together on her social media. The pictures also feature Sussanne’s siblings, actor Zayed Khan and designer Farah Khan Ali.

While Hrithik flaunted his long bearded ‘Vedha’ look in a black t-shirt, Saba looked radiant in a beautiful pink outfit. Susan opted for a little black dress, while her boyfriend Arslan Goni wore a printed shirt. 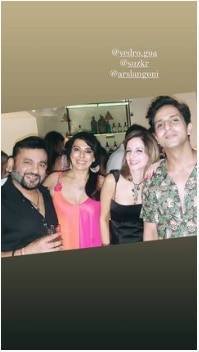 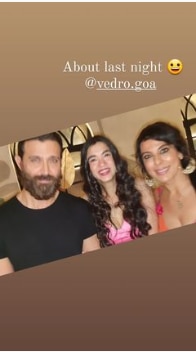 Hrithik and Sussanne were childhood friends and tied the knot in 2000. They divorced a year later, announcing their separation in 2013. The couple are parents to two sons, Hrehaan and Hridaan.

The rumors of Hrithik Roshan and Saba Azad started a few months back after the actor was spotted together at a restaurant in Mumbai. At the same time, speculations are being made about the relationship of Suzanne and Arslan for a long time.