MANZA, Albania (AP) – Former US Vice President Mike Pence on Thursday denounced the Iranian regime for “brutalism” and urged the Biden administration not to renew the nuclear deal with Tehran, saying it would boost Iran’s leadership. will get.

Pence flew 5,000 miles (8,000 km) from his home in Indiana to Albania and visited the Ashraf-3 camp, which is home to about 3,000 Iranian dissidents of the Mujahideen-e-Khalq, known as the MEK .

Speaking at the camp near a small mountain town 30 kilometers (19 mi) west of Tirana, the capital of Albania, Pence strongly condemned Tehran for its brutality, poverty and corruption.

Pence said the election of President Ibrahim Raisi, whom he called “a brutal mass murderer responsible for the massacre of 30,000 political prisoners”, was intended to “perpetuate internal dissent and intimidate the people of Iran to remain silent”.

He also visited the museum of the camp described as having killed or executed 120,000 Iranians since the Islamic regime came to power in 1979.

The Mujahideen-e-Khalq began as a Marxist group opposing the rule of Shah Mohammad Reza Pahlavi. This supported the Islamic Revolution of 1979, but soon he had differences with Grand Ayatollah Ruhollah Khomeini and turned against his clerical government, carrying out a series of assassinations and bombings in the Islamic Republic. 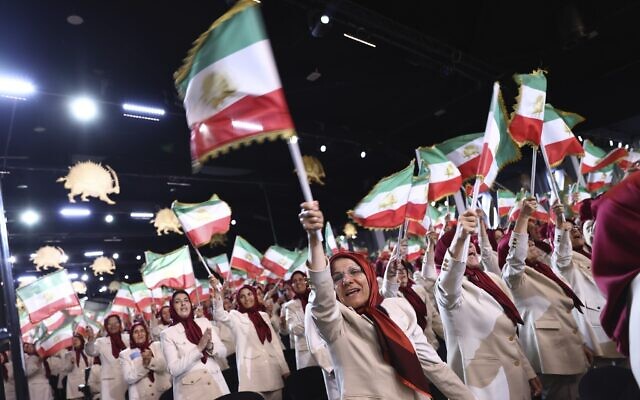 Members of the Ashraf-3 camp wave Iranian flags during a speech by former US Vice President Mike Pence at the Iranian opposition headquarters in Albania, June 23, 2022. (AP photo/Frank Zurda)

The MEK later fled to Iraq and supported dictator Saddam Hussein during his bloody eight-year war with Iran in the 1980s, leading many in Iran to oppose the group. Although now largely based in Albania, the group claims to operate a network inside Iran.

Pence praised the timing of his regime with former President Donald Trump, when he scrapped the Iran nuclear deal, referred to sanctions imposed on Iran’s Islamic Revolutionary Guard and brought Iran’s oil exports to near zero.

“A renewed deal with Iran will not block the path of Iran’s nuclear bomb,” Pence warned.

He added that an agreement would “in no way benefit the people of Iran but would only strengthen and enrich a corrupt regime that has oppressed and oppressed the Iranian people for generations”. Pence urged the Biden administration to “immediately withdraw from all nuclear talks with Tehran, voice support for the organized opposition in Iran, and make it clear that the US and our allies in Tehran will never be allowed to obtain nuclear weapons”. will not give.”

Does COVID-19 directly affect the brain? Here’s what the experts say

WhatsApp banned over 19 lakh Indian accounts in May