New Delhi: The India Meteorological Department (IMD) on Friday (January 14, 2022) issued a statement on ‘Climate of India during 2021’ and said that the country saw around 1,750 deaths due to extreme weather events last year.

The Meteorological Department said Maharashtra was the worst-affected state with 350 deaths, followed by Odisha and Madhya Pradesh.

Maharashtra is the most adversely affected state during 2021, which has reportedly claimed over 340 deaths due to extremely heavy rainfall, floods, landslides, lightning, cyclonic storms and cold-wave events. pic.twitter.com/O7M1SMGItB

It reported that thunderstorms and lightning killed more than 780 people in India last year, while 759 people died in incidents related to heavy rains and floods.

The IMD said the cyclonic storm claimed 172 lives and other extreme weather events led to the death of 32 others.

According to the report, 215 people lost their lives in Maharashtra, 143 in Uttarakhand, 55 in Himachal Pradesh, 53 in Kerala and 46 in Andhra Pradesh in incidents related to heavy rains and floods. 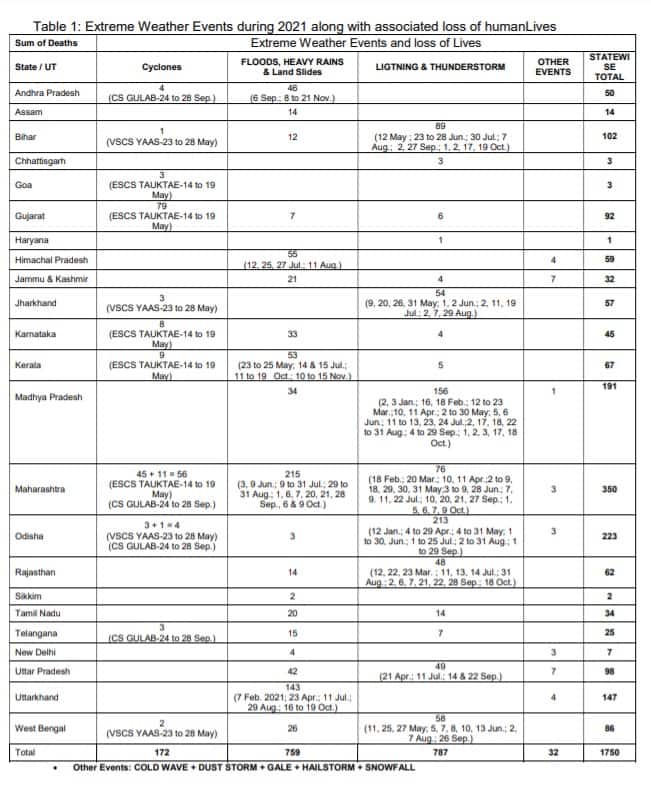 Of the seven deaths recorded in Delhi due to extreme weather events, four were due to heavy rains and floods, IMD data showed.