South Africa vs India 1st Test: Jasprit Bumrah took the second wicket of the innings off the last ball of the day, while Mohammed Shami and Mohammed Siraj left the hosts at 94/4 at the end of the fourth day at Centurion. 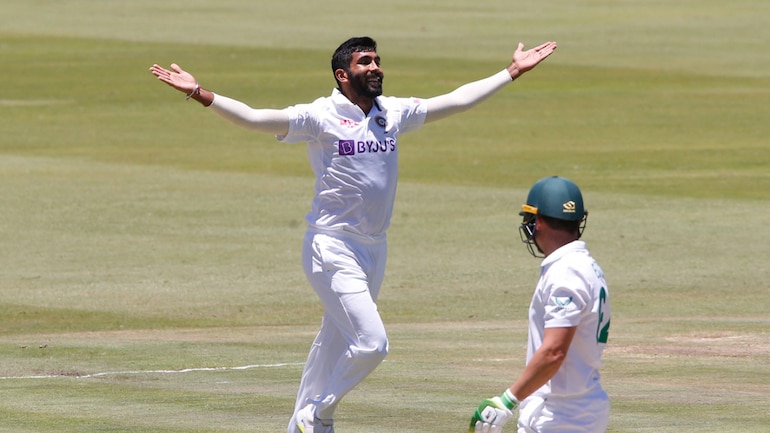 Bumrah dismissed Maharaj on the last ball of the day. (Reuters Photo)

Jasprit Bumrah dismissed nightwatchman Keshav Maharaj with a trademark yorker on the last ball of the day to keep India six wickets away from victory on the first day of the first Test against South Africa at Centurion on Wednesday.

The hosts were given a target of 305 runs with India attacking with the bat in the second session. Mohammed Shami, who took five wickets in South Africa’s first innings, dismissed Aiden Markram in his third ball on Wednesday.

Elgar and Keegan Pietersen managed to watch the remaining seven overs of the season, but the latter fell to Mohammad Siraj soon after the game resumed.

Rasi van der Dussen then dropped anchor with Elgar and looked within just 22 overs to send some concerns around the Indian camp. Van der Dussen took 65 for 11 before deciding to drop a length delivery outside Bumrah. The ball, however, came back into motion to hit the top of the off-stump and van der Dussen had to walk.

India started the day at 16/1 with their lead at 146. Nightwatchman Shardul Thakur was at the other end of opener KL Rahul and the latter fell nearly seven overs in the day. Rahul fell after scoring 23 off 74 before the end of the session after which skipper Virat Kohli and Cheteshwar Pujara watched India go on till lunch. In the process, they took India’s lead to 209 and the visitors clearly decided to shift gears and restart the game.

Kohli fell on the first ball of the season, thus ending the second consecutive calendar year for the Indian captain without a century. Ajinkya Rahane then played a quick innings of 20 off 23 balls, hitting three fours and a six.

Rishabh Pant and Ravichandran Ashwin then put on 35 runs in 38 balls for the seventh wicket and by the time India were all out, they had scored 174 runs and had a lead of over 300.

With rain predicted for the second half of the day on Thursday at Centurion, India will be looking to race through the rest of the South African lineup as quickly as possible.