Thousands of members of an Islamist group rallied in Bangladesh’s capital Dhaka on Friday to protest fresh clashes at Jerusalem’s Al-Aqsa Mosque.

A pro-Palestinian rally was also held Friday in Karachi, Pakistan.

Many carried the flags of Bangladesh and Palestine during a procession. Bangladesh does not have formal diplomatic relations with Israel and supports the establishment of an independent Palestinian state.

The protesters marched peacefully through the streets of Dhaka outside the country’s main Baitul Mokarram Mosque following Friday’s weekly prayers.

The conservative group has in the past organized similar protests to denounce France’s president and his staunch support of secular laws that deemed caricatures depicting the Prophet Muhammad protected under the nation’s freedom of speech. 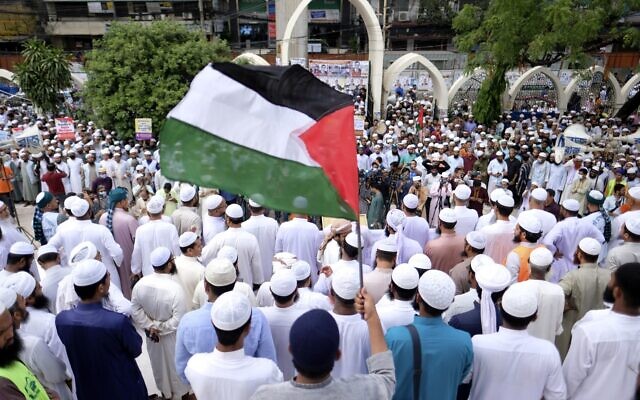 The renewed violence at the site — which is the holiest place in Judaism as the site of the biblical temples — came despite Israel temporarily halting Jewish visits, which are seen by the Palestinians as a provocation.

Last weekend, violence broke out in southern Sweden despite police moving a rally by a far-right group, which was planning to burn a copy of the Quran among other things, to a new location as a preventive measure.

Moulana Imtiaz Alam, leader of the Islami Andolon Bangladesh, urged the Bangladeshi government of Prime Minister Sheikh Hasina to officially denounce such acts. He also demanded the Organization of Islamic Cooperation to raise its voice.

“We ask the OIC and the Muslim countries to play an effective role against the misery of the Muslims and defamation of the Quran,” he said. “If the Bangladesh government does not take any steps in the OIC and the United Nations, we will conclude that they are working on behalf of Israel,” he said.

Israel is now a far more prominent player on the world stage than its size suggests. As The Times of Israel’s Diplomatic Correspondent, I’m well aware that Israel’s security, strategy and national interests are always scrutinized and have serious implications.

It takes balance, determination, and knowledge to accurately convey Israel’s story, and I come to work every day aiming to do so fully.

Financial support from readers like you allows me to travel to witness both war (I just returned from reporting in Ukraine) and the signing of historic agreements. And it enables The Times of Israel to remain the place readers across the globe turn to for accurate news about Israel’s relationship with the world.

If it’s important to you that independent, fact-based coverage of Israel’s role in the world exists and thrives, I urge you to support our work. Will you join The Times of Israel Community today?