Following the untimely demise of Sidhu Moose Wala, several celebrities from the film and music fraternity have come out to express their grief and sorrow. A day after the Bhagwant Mann government controversially withdrew his security cover, a Punjabi singer-turned-politician was shot dead on Sunday in a village in Punjab’s Mansa. The singer was taken to a local hospital where doctors declared him brought dead.

Now Punjabi-Canadian singer AP Dhillon has expressed his grief over this. He shared a picture of the late singer along with a broken heart emoji on his official Instagram handle. He also wrote a note saying that most people would never know the extent to which one has to come across as a Punjabi artist.

The Brown Munde singer began by writing, “Most people will never know the extent to which as a Punjabi artist you have to deal with behind the scenes on a daily basis. With constant judgement, hate comments, threats. And the negative energy is directed towards people like us who are doing what we love to do.”

He added, “I have always admired how Sidhu was able to rise above all this. He took it easy and stayed true to himself. Today I am praying for his family and praying for our community. We need to do better.”

Dhillon ended his note with condolence. 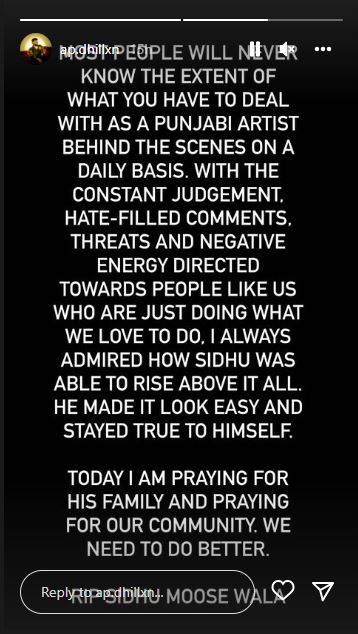 The news of the singer’s shock death has left his fans and industry colleagues in mourning. from comedian Kapil Sharma Actress Shahnaz Gill, Ranveer Singh, Vicky Kaushal And singer Harshdeep Kaur, many celebrities took to their respective social media handles to mourn the demise of Sidhu Moose Wala.